Continue to Deadline SKIP AD
You will be redirected back to your article in seconds
Skip to main content
December 9, 2020 12:17pm 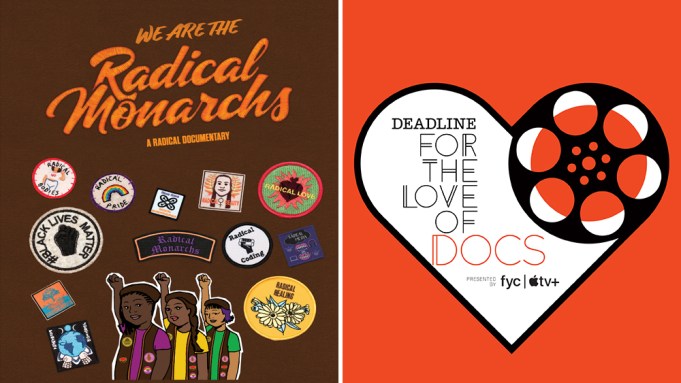 Filmmaker Linda Goldstein Knowlton first read about the Radical Monarchs in the San Francisco Guardian in 2015 when the group of young girls who are on the frontlines of social justice were garnering nationwide press. This was the initial spark for the documentary We Are The Radical Monarchs.

“I was blown away by Annayvette [Martinez] and Marilyn [Hollinquest] just from what I knew about them in this article,” said Knowlton, who was joined by Martinez and Hollinquest at a For the Love of Docs Q&A for the docu. “Just the mission statement of the Radical Monarchs took my brain to a whole other level on what is possible.”

Knowlton said that Radical Monarchs co-founders Martinez and Hollinquest didn’t realize they were starting a movement of sisterhood as 200 cities from around the world wanted their own branch of the Radical Monarchs as a result from all the press. “I thought it would be really powerful to show the two most intentional people I’ve ever met in my life — what it’s like for them to rise to the occasion and start that movement,” added Knowlton.

Based in Oakland, We Are The Radical Monarchs follows the aforementioned Annayvette Martinez and Marilyn Hollinquest, the creators of Radical Monarchs, an inclusive alternative to the scout movement. Instead of cookies, they participate in protests and earn badges for “Radical Beauty,” “Radical Bodies,” and “Radical Roots.”

When Knowlton approached Martinez and Hollinquest to make the documentary, there was skepticism, but once they saw the Whale Rider producer’s credits and what she was looking to do to collaborate with the Radical Monarchs to spotlight them, they knew she could be trusted.

Hollinquest pointed out, “Queer women of color [and] women in general — we’re not the center of documentaries or Hollywood-type films so I thought this would be a great opportunity.”

Since premiering at SXSW in 2019, the film has screened at numerous festivals and premiered on POV’s 33rd Season on PBS in July. After making its debut, Hollinquest said she shed some tears because she is a “crybaby” and Martinez said that Knowlton “captured the blood, sweat and tears” of creating the group and the work the Radical Monarchs do.

Watch highlights from the For the Love of Docs conversation above.