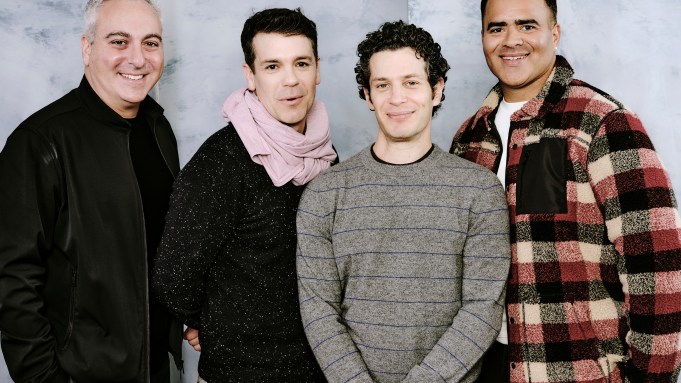 Before there were hit Broadway productions like Hamilton and In The Heights, a group of guys came together to form the improv hip-hop group Freestyle Love Supreme. The Andrew Fried-directed documentary, We Are Freestyle Love Supreme, follows the 15-year journey of the founding members Lin-Manuel Miranda, Thomas Kail, and Anthony Veneziale and more as they reflect upon why this show remains such an important piece of their personal, creative, and professional history–from the basement of the Drama Bookshop in NYC to the Broadway stage.

Fried and Freestyle Love Supreme members Kail, Veneziale, and Christopher Jackson stopped at Deadline’s Sundance Studio ahead of the film’s Jan. 28 Sundance Film Festival premiere and spoke about the experience of getting to relive their early days through the documentary.

“The thing that’s very moving for me is to remember how many of those things A) happened and B) were witnessed and now will be witnessed by other people. There’s stuff in the doc that when Andrew would share with me, I had no recollection of happening at all,” said Kail. “But that to me was the most striking. I find myself at a moment in my life where I think we can all look back and be able to very clearly understand that things happen every day that tear people apart and the fact that we’re still here talking about it, doing it and can perform the show, let alone just have each other in our daily lives is a miracle.”

For Fried, “I want those Hamilton fans and In The Heights fans, I want those people who are so obsessed with the thing that the final product that they now know every word to see where it all came from and to see that it genuinely did start in the humblest of beginnings and that’s how you get to that.”