Continue to Deadline SKIP AD
You will be redirected back to your article in seconds
Skip to main content
November 13, 2019 2:42pm 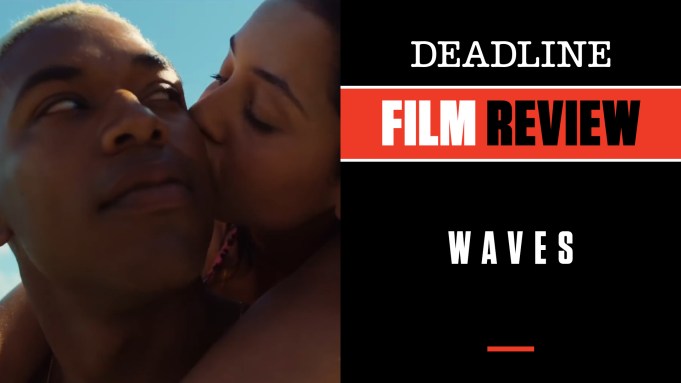 Waves, the new film from director Trey Edward Shults, left audiences reeling after its debut at the Telluride Film Festival a couple of months ago. Now everyone will get to see why it did. Shults, who showed promise in two previous films, Krisha and It Comes at Night, goes to a whole new level with this devastating portrait of a suburban South Florida African American family rocked to its core by a tragedy that changes their lives forever.

Using an unusual format that essentially divides the film into two parts — one focusing on the male teen in the family, a promising high school athlete named Tyler (Kelvin Harrison Jr.), and the other focusing on his more low-key sister Emily (Taylor Russell) — it might be tempting to call this a teen film, but that would be entirely missing the point in this piercing but ultimately hopeful movie. It is not a “teen movie” but rather one about teens, their parents, tough love, growing up and making choices in life — sometimes not the right ones. There may be comparisons to Oscar winner Moonlight, particularly with the similar Florida setting, but that film was more about discovering who you are. This one is about taking responsibility in so many different ways for this family thrust into crisis mode.

Tyler is definitely a young man with lots of promise, driven by a father, Ronald (Sterling K. Brown), who knows that to reach that promise someone in Tyler’s position has to work twice as hard in today’s society. Ronald pushes his son to the limit, and in so doing becomes overbearing even though it is clear there is love there, however tough, and even competitive in some ways. Confused, pushed in several directions, and in a volatile relationship with his girlfriend Alexis (Alexa Demie), Tyler is increasingly walking a tightrope. His stepmother Catherine (Renee Elise Goldsberry) is compassionate and looking to help, but it isn’t easy.

The first half of the movie sees sister Emily, fairly shy and unassuming, in a secondary role. Her time will come when she has to process and deal with an unexpected family crisis. Meeting a young man, Luke (Lucas Hedges), and striking up a relationship with him, however, takes the story in a completely different direction as Shults appears to be trying to end a bleak tale with a sense of renewal and a way forward. Emily and Luke, unique in their awkward coupling, help each other in dark corners of their lives in order to find a way out. It is sweet in a way, where Tyler’s trajectory was anything but.

If it appears I am tiptoeing around much of the plot here, it is because I am. This movie, in so many ways, is best to be discovered on its own terms — perhaps in waves as the title suggests. It is a universal story of many families where mistakes happen, unfortunate choices are made, and lives are torn apart then rebuilt. It is not only one of the year’s best films, it is also one of its most original, a movie that treats its teen leads as human beings taking distinct paths to adulthood  and learning consequences along the way. It is no less a learning lesson for the parents as it is for their kids, and for that reason this is a movie capable of shaking you to your core. When I saw it there were audible gasps at certain points and lots of talk after it was over.

The acting here is uniformly brilliant. Brown has moments that make you angry, and then moments of sheer compassion in a fully dimensional portrait of a man searching for ways to be a good father, however flawed. Harrison continues to show why he is getting a lot of plum roles in his young career (excellent earlier this year in Luce). The real discovery may be Russell, who brings real poignancy to a daughter, often cast in the background in the family but capable of turning into a butterfly. Hedges and Goldsberry are equally fine in smaller roles here.

The South Florida locations are shot with shimmering beauty by Drew Daniels, and there is a killer score from Oscar winners Trent Reznor and Atticus Ross. Music plays a huge part, and Shults has used it expertly throughout. Producers are Kevin Turen, James Wilson and Shults.

A24 opens Waves on Friday. Check out my video review above with scenes from the film.

Do you plan to see it? Let us know what you think.