Continue to Deadline SKIP AD
You will be redirected back to your article in seconds
Skip to main content
August 13, 2020 9:00am 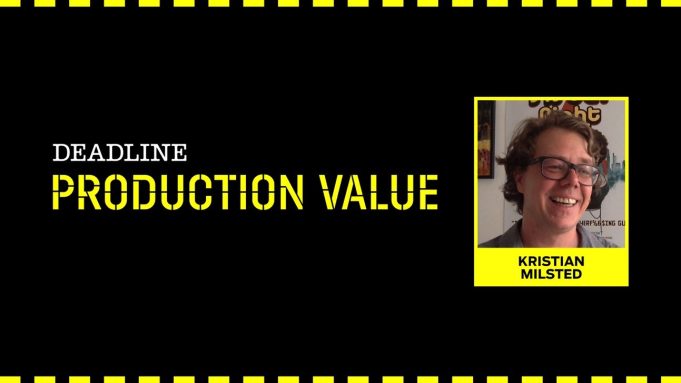 For production designer Kristian Milsted, HBO’s Watchmen was the largest undertaking yet in an already impressive career. Taking him into a number of different, colorful worlds, the series ultimately earned 26 Emmy nominations—the most of any show this year—though it would be incredibly difficult to pull off.

Created by Damon Lindelof, the drama takes place in an alternate version of the 20th century, in which vigilantes—once celebrated as heroes—have been outlawed, due to their violent methods of extracting justice. In this version of America, episodes of racial violence erupt in Tulsa, Oklahoma, as yellow-masked police officers face off with a white supremacist group known as the Seventh Kavalry.

As Milsted explains in the latest installment of Deadline’s Production Value video series, he was first approached by Lindelof for the project during the summer of 2018. “He just bombarded me with information for about 45 minutes. He knew everything about the world that he wanted to do, but he didn’t necessarily know what it was going to look like,” the production designer recalls. “That’s kind of the dream job for any designer, I think, to have somebody who’s that sure on his story, but is very open to what it could look like.”

On any project, Milsted’s instinct is to begin with extensive picture research. “I love photography, I love architecture, I love cinema and TV, so I try to really make a bible of images that you can draw on,” says the first-time Emmy nominee. “I try and read the scripts really quickly, and make my own stab at it, and kind of blow the project wide open to begin with.”

When Milsted spoke with Lindelof, it was clear that the original graphic novel of Watchmen, created by Dave Gibbons and Alan Moore, would serve as a primary visual influence for the world of the series, particularly when it came to color. “He was a huge fan of the novel,” Milsted says, “and wanted to stay very close to that.”

At the same time, the Watchmen creator didn’t provide his production designer with any reference imagery, or tie him down to any specific approach to his work. “At that time, they had already shot the pilot, and Mark Worthington, the very brilliant production designer, was not available to do the series, so they needed a designer to step in,” Milsted says, “and he didn’t even want to show me the pilot. He wanted a fresh set of eyes.”

Given the fact that the series was so wide-ranging in the worlds and time periods covered by its story, what was definitely important for Milsted was to give each environment its own look, which at the same time functioned in service of the overarching vision. “Almost each episode, you get another two or three worlds to explore, so it was important to us that you could cut from world to world without it being jarring,” he says, “but at the same time, you needed to be able to know kind of where you were.”

After the Watchmen pilot was shot, one of the first sets Milsted designed was the police precinct where much of the series’ action takes place—one of several key sets he would use to build out the look of this world. “I made a drawing of a precinct that was shaped almost like a cathedral—well, more like the houses of Parliament,” the production designer shares. “I loved a movie called The Darkest Hour, so I made a drawing based on a still from that movie, and I said, ‘This could be it. It could be like a concrete, brutalist cathedral shape, to show the audience that, okay. We don’t know whether the police are good guys or bad guys, but they’re definitely kind of serious guys.’”

The Tulsa precinct was one of a number of huge builds Milsted undertook for the series, and took a great deal of time to be brought to life. “Up to that stage, it was my biggest-ever set, so I walked over there like once a day, even if I didn’t have anything to do there,” the production designer says, “[just] to see how it was going.”

The series’ seventh episode, “An Almost Religious Awe,” was the one that earned Milsted his first Emmy nomination, and it gave him the chance to further build out the Watchmen world—with sets for smartest woman in the world, Lady Trieu, and 1987 Vietnam, as part of the origin story of Angela Abar (Regina King).

“Lady Trieu’s vivarium was a huge build. It was very inspired, again, by brutalist architecture. Damon’s brief to me was that Lady Trieu kind of lives in the jungle, so she took jungle from Vietnam and moved it to the outskirts of Tulsa in a giant dome,” Milsted says. “We designed the structure and gave that to the VFX company, who made the geodome, and then photographed it for us to have a huge translight. So, it was quite technically challenging in that way, and I really got into the teak effects, with the shots of concrete, and lots and lots of plants.”

Sequences set in Hanoi, meanwhile, were another huge challenge—and another exciting opportunity for worldbuilding. “I really got into [that], and how we could try to predict what it would have looked like, if America indeed had won The Vietnam War,” Milsted says, “and how the culture clash of an Asian country being overtaken by an American culture [would present itself].”

For scenes set in Hanoi, the Watchmen team took over a block in Griffin, Georgia—a town 45 minutes outside of Atlanta, where the bulk of the series was shot. This particular journey began with research into images of South Vietnam during The Vietnam War, the sequence taking some inspiration from Stanley Kubrick’s Full Metal Jacket. While the series’ art department dressed the interiors of three shops in Griffin, to transport them to Vietnam, the great challenge of the sequence was in its exteriors. Dressing the street to create the busy atmosphere of Hanoi on a national holiday, Milsted had all the shopfronts on the block built and hand-painted for the show, up to about 10 feet, with the visual effects team filling in anything above that height. “We had a lot of fun,” the production designer says, “and it was I think a two-week dress in Griffin.”

For the esteemed artist, the path to production design began during childhood. “I grew up in a quite creative household. My dad was in theater, and my mum is still working as an architect. I kind of thought I would get a proper job, where I could work from 9 to 5, and have holidays and stuff, but they corrupted me,” he jokes. “So, I think by the time I was finished with high school, and I was looking for universities, I found my way into film in Copenhagen.”

Working on any little film project he could find, in the early stages of honing his craft, Milsted would ultimately go on to film school in Denmark, and then to the National Film & Television School in London, where he met likeminded artists and experimented with different styles of design. “We formed kind of a committee, like a clique of Europeans. There were some Brits in there as well, but we all liked the same movies, and we went all the way back to Hong Kong movies with Wong Kar-wai,” he says. “We tried to push the colors, to do crazy storylines, shoot in locations that were really colorful, really weird, sometimes really small. It was just a bit of that going on.”

From Milsted’s perspective, Watchmen’s domination in the Emmy nominations last month was truly something to behold. “I think we’ve been lucky that we made a show that, for all the wrong reasons, resonates with what’s going on in the world and in America today, but I’m so proud of everybody involved. We worked very hard. We were very nervous about many things, taking on a much-loved graphic novel,” the production designer says. “It’s always a challenge when you take something that people really love, and you change it or fiddle with it, but I think we did well, because we were always true to the basic idea of the graphic novel. “

For Milsted, the job of the production designer is endlessly stimulating, never ceasing to get his imagination going. “I think it’s getting somebody’s vision. You know, you read the script, and you want to make it real. It could be the craziest thing in the world, but you want it to feel real, and I think that’s just, for me, the best job in the world,” he says, “telling stories and visualizing them, physically building stuff that great actors make their own.”

For more from our conversation with the Emmy nominee, click on the video above.