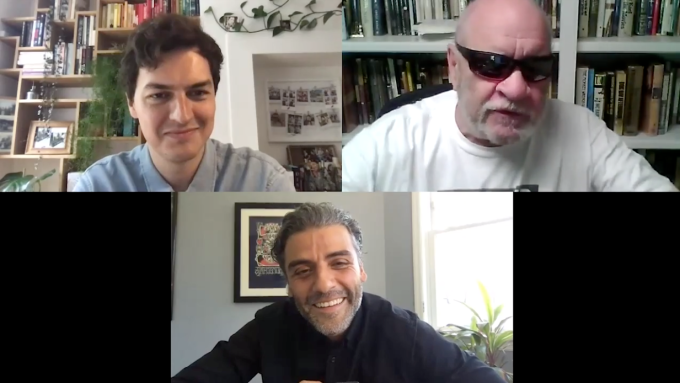 EXCLUSIVE: Deadline sat down (virtually) today with Paul Schrader and Oscar Isaac to chat about their new movie The Card Counter, which is aiming to head back into production soon after a five-month delay.

As we revealed today, the movie is aiming to resume shooting in Mississippi from July 6 after being on hiatus since March when a minor cast member tested positive for coronavirus with five days left to shoot. In the talk, Schrader confirms that SAG and local authorities have given the green light for filming to resume, with COVID safety measures in place, which the director says are challenging. “I would not want to start a film from scratch under those conditions,” he adds.

During the lockdown, Schrader has had the opportunity to edit 90% of the movie, which he says he has shared with the team, including executive producer Martin Scorsese. For Isaac, who plays card shark William Tell in the pic, the pause has been a chance to re-focus on his career. “Now I see what it’s like not to work, I’m like, why the f*ck did I work for so long? Jesus, this [not working] is great,” he says.

“I’ve felt like I had been a man in a desert [a “blue screen desert”, quips Schrader] for many years because I’ve been serving these bigger films,” Isaac adds, referencing his work on pics such as the Star Wars franchise. He also talks about filming on Denis Villeneuve’s Dune, which Deadline revealed today will head back to Europe for further shooting in August.

While Isaac found the experience of working on large-scale movies with huge teams an enjoyable challenge, he says that he wants to focus on indie projects, like The Card Counter, going forward. “It feels for me like a personal turning point,” he comments.

Does that reduce the chances of his Star Wars character Poe Dameron ever returning to screens? “Probably,” replies Isaac, unless he “needs another house,” he jokes.

The pair cover a wide range of topics during the discussion, with Schrader revealing he has been looking to cast Isaac for a while, and considered him for First Reformed before landing Ethan Hawke.

On the Card Counter, Schrader and Isaac consulted with Joe Stapleton, a professional poker player and commentator on the game. Since then, Schrader says he has been taking part in a twice-weekly poker tournament on Zoom called Club Quarantine that includes Hollywood stars including Paul Dano.

The director also discusses how he has received multiple offers to direct episodic content but has turned them down because he wants to make “handmade” movies, i.e. more indie productions, of which he says him and his Taxi Driver and Raging Bull collaborator Scorsese have a mutual love. Isaac also adds that he wants to make “handmade films” with people who inspire him, like Schrader.

The Card Counter also stars Tiffany Haddish, Tye Sheridan and Willem Dafoe. Braxton Pope, Lauren Mann and David Wulf are producing with William Olsson and Scorsese as executive producers. HanWay Films will be continuing sales efforts on the movie at the Cannes virtual Marche next week, with David Gonzales of Northside Services and Endeavor Content overseeing the U.S. sale.

You can watch the discussion in full above.