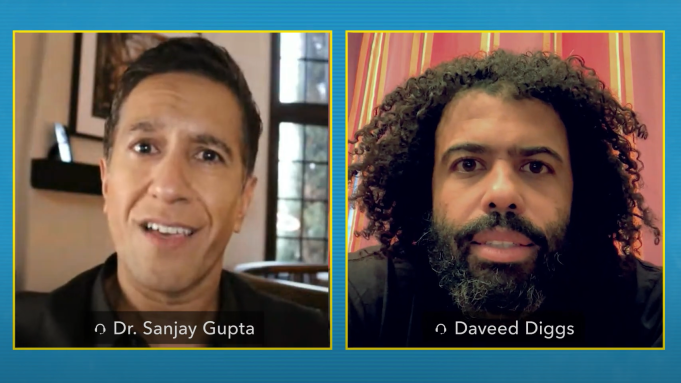 EXCLUSIVE: WarnerMedia is debuting a number of Covid-19 vaccine PSAs featuring stars from their series. The public service announcements were created in partnership with the Ad Council, in support of their ongoing Covid-19 Vaccine Education campaigns.

In the clip above, Snowpiercer star Daveed Diggs admits to Dr. Sanjay Gupta that he’s nervous about taking the vaccine. “I’ve got songs to write,” he says. “Will I still be able to do that?”

“It’ll be fine, Daveed. Science is what you need,” raps CNN’s chief medical correspondent. “The vaccine is safe, my friend. It’s gonna bring this pandemic to an end.”

“You see what I did there?” he jokes, in a wink at the Grammy and Tony Award winner’s Hamilton days.

The “It’s Up To You” campaign will air across all WarnerMedia and AT&T-owned cable, digital, streaming and social platforms starting next week. Meanwhile, the Ad Council will be sharing the PSAs across their own network of distribution platforms.

The PSAs were written and directed by the internal creative team at Warner Media’s 10th Street Studios, which previously created the “Mask Up America” campaign. Also making an appearance in support of the latest campaign is The Flight Attendant’s Rosie Perez. Naturally, in support of Covid safety, each of the campaign’s videos was produced remotely.

“WarnerMedia is proud to work with the Ad Council to continue to grow awareness and drive vaccine adoption,” said Dennis Williams, Head of Corporate Social Responsibility, WarnerMedia. “Having Sanjay, Rosie, and Daveed help us create and build a conversation around getting vaccinated will not only inspire action, but also save lives.”

“We continue to be so grateful to the WarnerMedia team for their commitment to educating Americans on protecting themselves and their families from COVID-19,” added Heidi Arthur, Chief Campaign Development Officer, Ad Council. “We know that many Americans have questions about the vaccine, and are so thankful to Sanjay, Rosie, and Daveed for helping educate and inspire Americans to get the answers to their questions so they can make an informed choice about vaccination for themselves and for their families.”

With its Season 2 finale on the horizon, dystopian thriller Snowpiercer has already been renewed for a third go-round. While The Flight Attendant was initially conceived as a limited series, it was renewed for a second season in December of last year. Recently, the darkly comedic thriller earned two Golden Globe nominations, including Best Television Series – Musical or Comedy, and Best Performance by an Actress in a Television Series – Musical or Comedy. The latter nom went to EP and star, Kaley Cuoco.

For a look at Gupta’s conversation with Perez, as part of the “It’s Up To You” campaign, click on the video below.