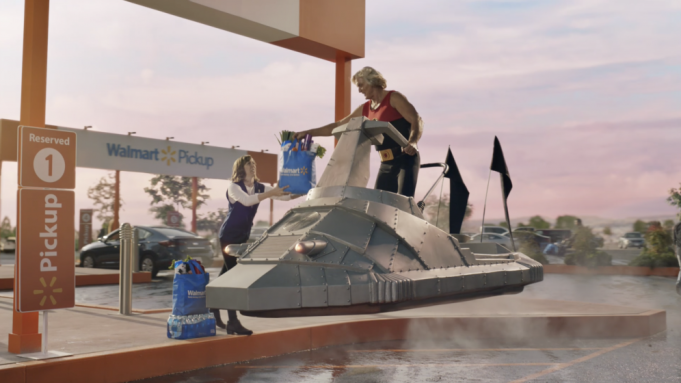 Walmart didn’t just go big for their first Super Bowl ad, they went out-of-this-world. The big-box retail giant’s commercial for the Super Bowl LIV is a who’s who of intergalactic cinema, featuring some of the most iconic spaceships and characters from sci-fi and beyond.

From Sam Jones reprising his role as Flash Gordon to Star Trek’s USS Enterprise to Bill from the Bill and Ted franchise to Toy Story’s Buzz Lightyear from Toy Story’s Buzz Lightyear to the Hetapod from Arrival to C3PO and R2D2 from Star Wars, the Walmart ad features a collision of worlds as we see our favorite figures from sci-fi and pop culture. The ad features all of these characters coming together at Walmart for grocery curbside pickup.

Others included in the commercial are The Spinner from Blade Runner, Benny and Lucy from The LEGO Movie, the Mars Attacks crew, Frank the Pug from Men in Black and teenage Groot and the Milano from Guardians of the Galaxy. It is clear that Walmart spared no expense when including all of these pop culture sci-fi icons.

Watch the extended version of the commercial below or the 60-second version below. Either way, see how many of the spaceships and characters you can recognize.