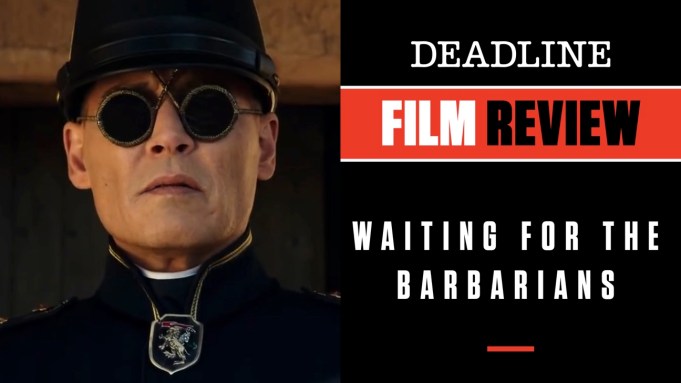 Waiting for the Barbarians is truth in advertising because this new film is so painfully paced it feels like an eternity while we are waiting for said Barbarians. Or actually anything to happen.

Fortunately, this movie has a very accomplished and watchable cast, particularly with the main lead, Oscar winner Mark Rylance (Bridge of Spies), and the likes of another quirky turn from Johnny Depp and another offbeat supporting role for Robert Pattinson. Add to that an Oscar-winning cinematographer shooting vast landscapes worthy of Lawrence of Arabia, a script from a Nobel Prize-winning author and a director whose past two foreign language films were widely acclaimed. So what possibly could go wrong? Just about everything, which may be why, despite the pandemic, we are seeing what is pretty much a straight-to-VOD release for something that cries out for a big screen.

Here’s what plot there is. We are in some country in an outpost in an isolated frontier settlement of an unnamed empire. The Magistrate there (Rylance) is living la vida loca in terms of coasting toward the end of his tour of duty when in pops creepy and deadly-serious Colonel Joll (Depp), who ostensibly is tracking activities of the Barbarbians as well as the questionable security of the border. To do this, sitting regally atop his horse with very distinct-looking, almost designer-like dark glasses, Joll begins his interrogations and brutal beatings. He’s a man with no backbone and certainly one who rubs the Magistrate the wrong way.

Later on, his cohort Officer Mandel (Pattinson) arrives to exhibit his own brand of punishment on the locals. The Magistrate tries to carry out a policy of getting along with the native population and seems horrified that his uninvited superiors use other methods. We see him start to crack as Joll begins his law-and-order spiel.

Based on his 1980 book, 2013 Nobel-winning author J.M. Coetzee turns screenwriter as well, but something is lost in translation. That also might be the problem for Oscar-nominated Colombian director Ciro Guerra, whose past two films — Embrace of the Serpent and Birds of Passage — were highly acclaimed, but here finds himself working in the English language for the first time. As good as his cast is — and they are very good — this intended political fable, with its echoes of racial divide we see happening in its own form today, does not quite catch fire. There are long, gorgeous shots of the desert surrounding the lone outpost that make me think Guerra and two-time Oscar winner Chris Menges (The Mission, The Killing Fields) are more interested in the visuals than the human story at hand.

Thank God for Rylance, who has some level of fire in his belly and achieves a three-dimensional performance despite the weakness of the material. Depp, who is very good in the still-domestically unreleased Minimata and City of Lies, is always fascinating to watch and livens up the proceedings in his scenes without batting an eyelash (literally) as he coldly shows who’s boss in confrontations with the Magistrate. Pattinson seems to struggle a bit with his Officer role but, in his brief appearances, makes a game try at putting some flesh on those bones anyway. Without much dialogue actress Gana Bayarsaikhan as “The Girl” is put through the ringer effectively and registers with some truth.

Still, despite its cast and look, Waiting for the Barbarians sadly is a bit of a slog. Production values are there, but where’s the beef? Producers are Monika Bacardi, MIchael Fitzgerald, Andrea Iervolino and Olga Segura. The Samuel Goldwyn Company releases it Friday on VOD tomorrow. Check out my video review with scenes from the film at the link above.

Do you plan to see Waiting for the Barbarians? Let us know what you think.