Continue to Deadline SKIP AD
You will be redirected back to your article in seconds
Skip to main content
April 7, 2021 4:00pm 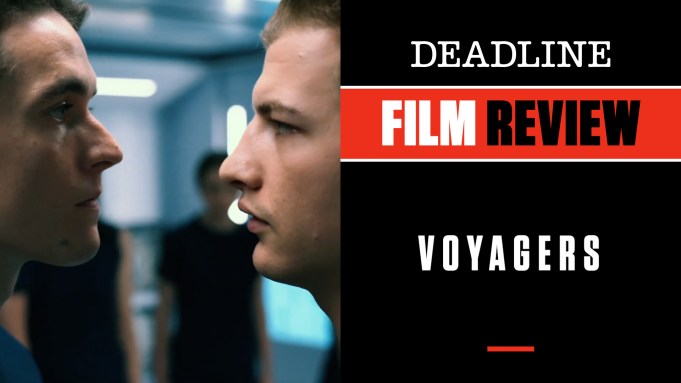 On its surface, the new Lionsgate sci-fi adventure Voyagers feels like it is taking a page right out of the many YA dystopian movies that have populated multiplexes over the past few years. This one comes from an original screenplay by director Neil Burger, but the concept feels tailor-made to create another franchise — and excuse — to hire a sizzling young cast of twentysomethings and set them loose against each other, this time on an 83-year voyage to another planet where hopefully they can colonize a new society and keep the human race, at the end of its rope on Earth, still viable with a shot at rebirth.

There are elements of many other films you have seen here in YA adaptations from The Hunger Games to Lord of the Flies, along with 2001: A Space Odyssey and even a touch of Cocoon and West Side Story — the latter because of its divide between the Jets and the Sharks. It its own way Burger’s film has that kind of division too, but I get ahead of myself.

It is far into the future, and Earth as so often is the case in these movies is on the brink of extinction as far as the human race is concerned. A group of young people, bred especially since birth to train and partake on this spaceship to another existence, is now about ready to depart on its mission to carry on the human race and colonize a new society eight decades or so in the future, their lives played out in a confined atmosphere that also will test their rigor and endurance.

Richard (Colin Farrell) has been their guardian since a very young age, takes pride in nurturing them in this experiment, and though he doesn’t have to go has decided to accompany them on the journey even though he knows he will not live to see it through. He is the only person over 30 on board, but a good guy who still has kept a secret from his young crew: They are being fed The Blue, a drink that controls their human urges and emotions — only they think it is just  simple vitamins until they discover otherwise, and then all hell breaks loose and the behavior often seen in youth comes bubbling to the surface in ways this group has never experienced.

Among them is unsteady but intriguing Christopher (Tye Sheridan), who is somewhat defiant upon awakening but also trying to keep his feelings in check with a moral center, all the while emerging to be the titular leader after Richard fades from the scene. His good friend Zac (Dunkirk’s Fionn Whitehead) is a real live wire, an intense kind of personality who not only brings a sense of wildness to his colleagues, but also to the rather compressed nature of the movie whenever he is not around. In the middle between them is the ship’s medical chief Sela (Lily-Rose Depp), who is also exploring her own human needs after being unleashed but also trying to keep a sense of cool and responsibility. There are others with their own agendas including Phoebe (Chanté Adams), and Edward (Isaac Hempstead Wright — Bran from Game of Thrones), a key tech genius who suspects there is an alien in their midst and sets out to find it.

Once the emergence of The Blue takes place, long-suppressed human desires come to the surface, sexual needs arise, fights break out, and Zac reverts to his dark side in splitting the once united crew into two factions, forcing confrontation between his followers and those of Christopher’s in keeping this journey on course before it all falls apart. In other words, human beings will be human beings no matter where they may find themselves.

What Burger is trying to do is set a study of us when our feelings are set free, our strengths and flaws and complications, all in this petri dish about to explode. Although this movie falls straight into the typical sci-fi outer space genre, its goals are complex in revealing our basic humanity and all the contradictions therein. There is no doubt, if successful, this is set up for a potential sequel and franchise, something Lionsgate has lots of experience in doing. At times it all feels a little too strait-jacketed, save for Zac’s liveliness (Whitehead steals the film on raw energy alone), but eventually once the action comes in earnest our interest also increases. Sheridan (X Men: Dark Phoenix) has long been a young actor to watch, and if this one doesn’t reach the levels of Spielberg’s sci-fi exercise Ready Player One in which he starred, it still allows him to strut his stuff.  Depp, daughter of Johnny, shows genuine promise here, understated but effective as Sela. Farrell’s role doesn’t give the actor much chance to show range, but he lends gravitas to the cast that includes other up-and-comers Viveik Kalra, Archie Madekwe, Quintessa Swindell and Madison Hu.

Producers are Burger, Basil Iwanyk and Brendon Boyea. AGC financed the film. Lionsgate opens it in theatres on Friday.

Check out my video review above with scenes from the film. Do you plan to see Voyagers? Let us know what you think.