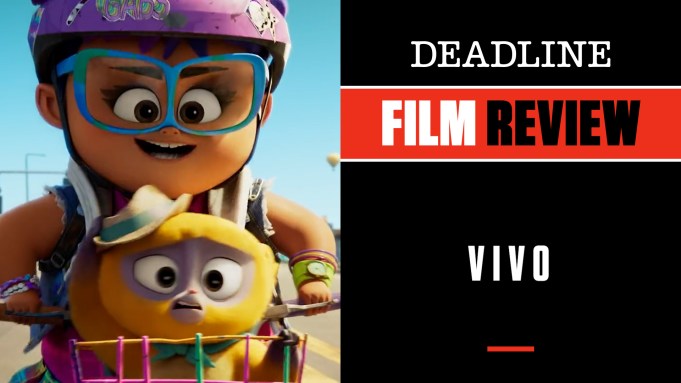 It is turning out to be quite a year for Lin-Manuel Miranda. His Tony-winning In the Heights hit movie screens, his Hamilton has 12 Emmy nominations including one for him, his directorial effort Tick Tick…Boom is about to take off on the fall festival circuit, and he has two animated films including the fall release: Encanto for Disney and the August 6 Netflix release of Sony Pictures Animation’s Vivo, for which he not only wrote all the songs but also voices the title role of the lovable kinkajou. If this delightful Latin-flavored toon was his only project, I still would say this has been a very good year for the prodigious artist.

Vivo, which Sony has sent to Netflix due to distribution complications of the pandemic era — as was the case of their earlier 2021 animated film The Mitchells vs. the Machines — is pure Miranda joy. It reps his second major animated effort since contributing songs, including one that earned him an Oscar nomination, for Disney’s Moana, and I have no doubt one or two of his tunes for Vivo could do the same thing.

Opening on the streets of Havana with a lively musical number setting the stage (as was the case in the live-action In the Heights) we meet Vivo (Miranda), a one-of-a-kind rainforest honey bear who spends his days in the middle of town showing off his musical talents with his aging, beloved friend Andres (voiced beautifully by Juan de Marcos of Buena Vista Social Club). Andres receives a letter from long-lost secret love Marta Sandoval (Gloria Estefan), an old friend who went on to fame and fortune as a major star in Miami but now reaches out to reconnect by inviting him to join her for her final performance. He is excited to reunite with her and shares the sheet music with Vivo for the song he wrote for her but never got to deliver, essentially a love letter put to music. In it he lyrically spills his heart and passion for the romance that would never be.

When Andres tragically passes away before being able to travel to Miami, a heartbroken Vivo becomes determined to somehow make the journey and get the song to Marta. Enlisting a young girl named Gabi (newcomer Ynairaly Simo) to help him in his quest, the pair turn to the internet to find a way to get from Cuba to Florida and deliver the song. They have to do this without Gabi’s mom Rosa (Zoe Saldana) finding out, but it gets complicated as they keep getting immersed in difficult situations from encounters with a pair of star-crossed spoonbills (Brian Tyree Henry and Nicole Byer), a confrontation in the Everglades with a hungry serpent named Lutador (Michael Rooker) and a trio of intense but helpful Girl Scouts (Katie Lowes, Olivia Trujillo, Lidya Jewett). Will they make it time to Marta’s final show, and will the sheet music’s arduous journey also survive intact?

With sharp direction by Kirk DeMicco (The Croods), who co-wrote the script with longtime Miranda collaborator Quiara Alegria Hudes (In the Heights), and co-directed by Brandon Jeffords (Cloudy with a Chance of Meatballs), the gorgeously animated film is largely CGI but peppered with visually stunning standard 2D animation for some musical sequences. Vivo certainly benefits from “visual consultation” by two-time Oscar-winning cinematographer Roger Deakins, plus an authentic underscore from Tony and Grammy winner Alex Lacamoire (The Greatest Showman).

Miranda contributes sweet vocal work as Vivo, matched by a well-chosen cast including Saldana, de Marcos, Rooker and Estefan, the latter perfection as she pours emotion into her role as the veteran star who never realized the feelings Andres had for her. Contributing her voice on more than one song, she gets what I can only describe as a signature Estefan moment with the song at the center of the whole story, “Inside Your Heart,” which is sung in both English and Spanish. Among the fine tunes Miranda has written for the film, that one is a highlight, as is the lively “Keep the Beat” and several others, many inspired by old-school guajira-son songs that move the tale along. Gabi’s big moment, the hip-hop grrrl anthem she sings to Vivo, is a complete departure from the rest of Miranda’s score and is an acquired taste, but kids will like it (for some reason, it is repeated over the end credits).

Vivo is indeed a special treat for families.

Producers are Lisa Stewart, Michelle L.M. Wong and Rich Moore. Miranda is an executive producer along with Laurence Mark (The Greatest Showman, Dreamgirls) and Louis Koo Tin-lok. Check out my video review with scenes from the film at the link above.

Do you plan to see Vivo? Let us know what you think.