Continue to Deadline SKIP AD
You will be redirected back to your article in seconds
Skip to main content
March 26, 2020 3:00pm 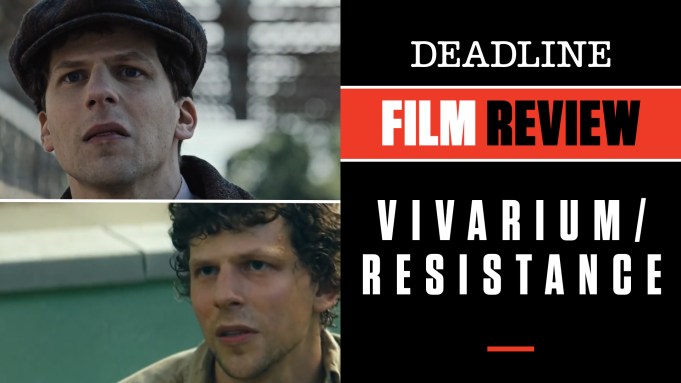 Jesse Eisenberg was Oscar nominated for his performance as Mark Zuckerberg in The Social Network, so maybe it’s appropriate that he has a year’s worth of feature film work debuting on the same day that you can access right through the Internet. It is highly unusual for an actor to see two new movies opening against each other, but that is exactly what is happening for Eisenberg in these unprecedented times as the weird and eerie sci-fi/horror mash-up Vivarium, and Resistance, an inspiring story of a rescue of thousands of orphans from the clutches of Nazi Germany in the late 1930s, are available for home viewing through various platforms beginning Friday. So are they worth the price to watch at home? Here’s my take.

I saw Vivarium in May during Critics’ Week at the Cannes Film Festival. The description of the film, about a young couple who get sucked into a nightmarish suburban neighborhood from which there is no escape, was intriguing enough for me to make the long walk to the Miramar screening room and brave the lines to check it out (it also had the distinction of being the only English-language film chosen for that particular Cannes sidebar). What I discovered was a bit disappointing, essentially a fairly one-dimensional story that would be a lot better (and shorter) if it was an episode of The Twilight Zone, which probably is where this idea belongs rather than stretched out to a 97-minute feature length.

Lorcan Finnegan who cooked up the story with its screenwriter Garret Shanley, directs this odd tale of unmarried couple Tom (Eisenberg) and Gemma (Imogen Poots) who want to find a house to move into and stumble upon a very strange real estate agent named Martin (Jonathan Aris). He shows them a home, simply identified as #9, in a pea soup green neighborhood with rows of identical houses but no sign of life anywhere around them. Realizing it is not for them, they set to leave but discover Martin has just disappeared.

An attempt to drive out of there ends in frustration as they just go around in circles, always landing right back in front of #9. Eventually a box with food and household items appears, and then another with a baby in it. For Tom and Gemma, this is all turning into some Kafkaesque nightmare from which there is no escape. Time passes, the baby is now 10 and looks like an identical offspring of Martin, and just as bonkers creepy. He makes the kid in The Omen look like a Boy Scout by comparison. Stuff happens. Eisenberg, and the always-welcome presence of Poots do their best to keep straight faces throughout this thing, but much of it defies credibility — which I suppose makes sense in some way.

Vivarium is clearly trying to say important things about the way we succumb to conformity in the deadening age in which we live, and taken on that level there is a little food for thought here. The production design is abstract and just right for the film which was obviously made on a low budget, and Finnegan knows how to build atmosphere so fans of this kind of thing may want to visit, but others I am afraid will just be scratching their heads.

The other Eisenberg entry this week is more worthwhile, if at times unflinchingly hard to watch. Resistance is a true story, largely unknown even to those in France where it takes place, and stars Eisenberg as none other than a young Marcel Marceau. That is right, Marcel Marceau, perhaps the most famous mime who ever lived. But this is not about his later life in show business but rather the heroic things he did in 1938 and ’39, when he helped lead 10,000 orphans to safety from invading Nazis during the French resistance.

It is an inspiring and powerful if at times harrowing tale of how Marcel (then known by his birth name Marcel Mangel) pulled off this feat with the help of a group of others in the Jewish Boy Scouts, forced to outwit the Nazi officers and one in particular — the evil Klaus Barbie (played with horrifying intensity by Matthias Schweighofer) — who was determined to stop the exodus. One pulse-pounding scene finds Barbie confronting Marcel and suggesting his big fake moustache was meant to parody Hitler, but instead is convinced that it is all part of his Charlie Chaplin impression in order to entertain the children.

Resistance, effectively written and directed by Jonathan Jakubowicz, not only follows Marcel but other characters caught up in the resistance efforts, with an excellent ensemble cast including Edgar Ramirez, Geza Rohrig, Bella Ramsey and Clemence Posey, the latter as Emma and serving as a bit of a romantic interest for the young man. A sequence near the beginning of the film in which the cold-blooded nature of the enemy is shown in no uncertain terms, as well as Barbie’s scenes of torture and murder in an empty swimming pool at the Hotel Terminus, are presented in chilling fashion, so be warned. But for the most part this is a story of the courage of a person we later would come to know in a much different light after the war, a little-known aspect of the man who entertained so many without uttering a single word.

Eisenberg is very convincing, even naturally resembling Marceau, and also acquits himself convincingly in scenes where his mime talents are showcased. Opening and closing scenes that bookend the film feature Ed Harris in a cameo as General George S. Patton addressing his troops to praise the wartime heroism of “a man named Marcel.” The ending is very moving, and this is one of Eisenberg’s finest performances.

Saban Films is releasing Vivarium in all U.S. media. IFC Films has Resistance. Check out my video review of both films above with scenes from each.

Do you plan to see Vivarium and/or Resistance? Let us know what you think.