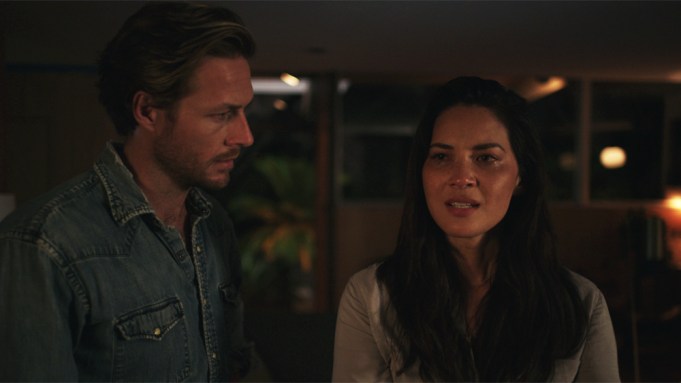 The voice in her head is relentless: “You’re a freak. You’re fat. Your hair is gross. You’re a baby. You smell. Don’t be a bitch.”

Here is the first trailer for Violet, a drama starring Olivia Munn from first-time feature writer-director Justine Bateman that premiered at SXSW. Have a look at the footage above and the poster below.

Munn plays Violet Calder, who realizes that she no longer can ignore the daily barrage of self-criticisms (voiced by Justin Theroux) that clouds her life.

“You’re nothing. You’re a loser. You’re so selfish.”

The put-downs cause her to make fear-based decisions and hold her back from the kind of professional, personal and romantic life she knows she wants. Unsure how to live a life free from that self-doubt, like her childhood friend Red (Luke Bracey), Violet realizes she has no choice but to travel the road that is more frightening to her than the fear that holds her back: doing everything differently.

What would you do if you weren’t afraid?

‘Violet’: Justine Bateman Explores “The Voice” In Your Head That’s Lying To You In Feature Directorial Debut – SXSW Studio

Here is the key art for Violet: