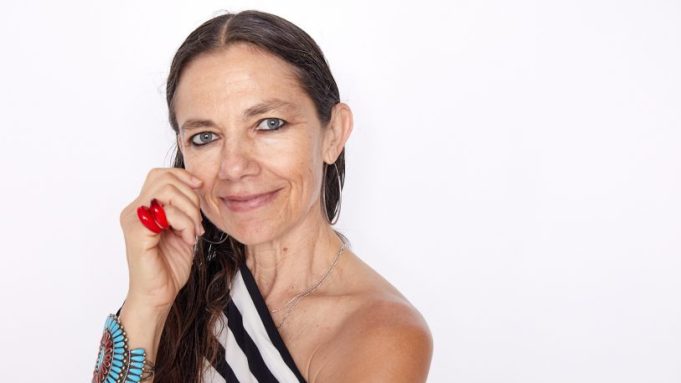 Violet, the title character in Justine Bateman’s feature directorial debut, seemingly has it all: a great job as a Hollywood production executive, beauty and intelligence, plus a handsome, supportive male friend and potential romantic partner. So why does she keep falling prey to that critical voice in her head telling her she’s messing up everything?

“Pig!” the voice says, after she dares to take a bite from a sugary Sno Ball.

“[Violet] is about the thoughts we have–or in the film, we call it ‘the voice’–that treats you like crap, that makes you make fear-based decisions,” Bateman said as she dropped by Deadline’s TIFF Studio in Toronto. “And the more fear-based decisions we make, the further we get off track from being ourselves. So, this is a film about a woman who realizes that she’s gone off track… [But] how does she cross this chasm?”

Bateman (Family Ties, Desperate Housewives), wrote, directed and produced the film, casting Olivia Munn in the lead role and Luke Bracey as “Red,” the screenwriter Violet might just fall in love with, if she would only follow her instincts and not what the cautious and doubting “voice” tells her. The director said she takes a thorough approach to choosing her actors.

“I like to look at any video I can on them, whether it’s on their social media accounts or interviews that they’ve done, and of course their work,” Bateman said. “Because I’m looking for particular qualities that they may not have truly brought to the surface in their personal life or in roles they’ve played that I know I can tease out and expand for the characters that I’m looking at them for.”

For the “editor” in Violet’s head, Bateman made the bold choice to use a male voice, supplied by actor Justin Theroux. She said that allows the audience to perceive that Violet’s inner critic isn’t her authentic self; by extension, viewers may come to see the critic in their heads—the inhibiting superego–as coming from outside themselves.

“I wanted to say, ‘Think about those negative thoughts as if Justin Theroux is saying them to you,’” Bateman observed. “Or not necessarily Justin Theroux, but just think about the voice as something separate from you, just as an experiment, and see if you can’t observe those thoughts, those critical thoughts, objectively. And then it’s easier to notice that they’re lies.”

Bateman says she wrote from experience.

“I did do a fair amount of research for this role, let’s say,” she joked. “I’m an expert in dealing with this because of the processes that I’ve gone through in my life to get on the other side of making fear-based decisions, where I’m making instinct-based decisions instead.”

The film has taken a circuitous path to reach audiences.

“Violet was supposed to premiere in person at SXSW in 2020 and of course that was cancelled,” Bateman said. “And then we were lucky enough to premiere it virtually at South By 2021 and I thought, ‘Alright, well I guess I don’t get to have an in-person experience with this film.’ And then Diana Sanchez from TIFF called and said, ‘We want it.’ I was like, ‘Really?’”

She adds, “I thought I’d have to wait for my second film for the in-person experience as a feature director at a festival. [The] Toronto Film Festival is one of the absolute best. It’s phenomenal. I’m so, so grateful to festival programmers because I feel like they are the keepers of the torch for great filmmaking.”

Watch Justine Bateman delve further into Violet in the video above.