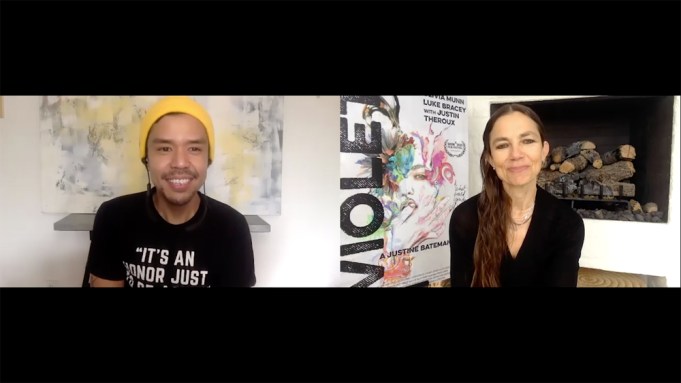 In Justine Bateman’s feature directorial debut Violet, we are introduced to the titular character played by Olivia Munn. She’s a 32-year-old film executive who is living an impressive life in Hollywood — but then there’s “The Voice” in her head (Justin Theroux). It’s that inner dialogue everyone has that results in fear-based decisions. Violet has made these decisions to avoid potential “worst-case scenarios” in her romantic life, her family life, and her professional life. Because of this Voice,  she has lost her real identity and has grown accustomed to this. She thinks it’s all fine until a friend’s comment makes her realize that The Voice has been lying to her.

The film, which debuts today at SXSW Online, speaks to this #MeToo era of toxic behavior in the workplace — specifically Hollywood. When Bateman visited Deadline’s virtual SXSW studio, she said that she wrote this script in 2011, so this story was ahead of her time.

Violet is told in an interesting way with voiceovers, gritty cuts and script scrawling across the screen as Munn’s character grapples with her inner saboteur. “I really wanted it to be an experience for the viewer,” said Bateman. “I wanted it to be a car they get into or a coat they put on… and they get to experience themselves. That’s why I had the voice, the writing coming up, the inner-monologue and the inner-experience pressing down on Olivia’s performance to create a pressure cooker.”

Even though the story eerily parallels the scandals that have plagued Hollywood in the past decade, Bateman explains that it just doesn’t pertain to the industry.

Bateman set Violet in Hollywood because there’s something about having a very beautiful woman in a career that a lot of people desire to be in. In the movie, Violet is in an aspirational position and when people see her struggling, others outside of Hollywood can connect to her and, in turn, be motivated to ignore and silence their inner saboteur.

“The idea that one has critical thoughts that are lies that affect your behavior and you make fear-based decisions that cause you to not be yourself,” said Bateman, “I think that’s just a human condition element that hopefully more people can just get away from.”