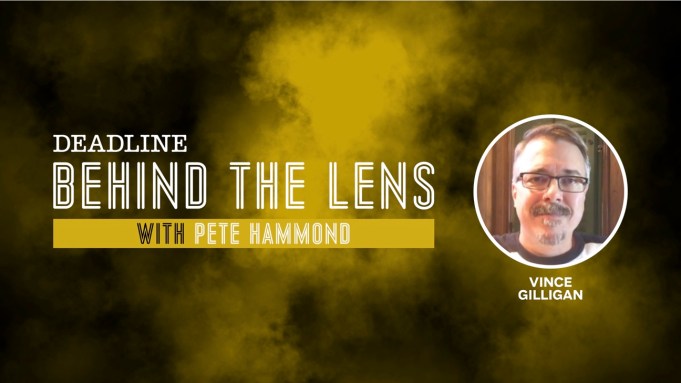 It’s not often you get Vince Gilligan to sit down for an extensive interview, so in his conversation with me for my Deadline video series Behind the Lens I didn’t want to waste a moment. In addition to an edited version as is customary here, we are also presenting the full uncut talk as the man behind Breaking Bad and Better Call Saul spills all. Well maybe not all, but it was great fun for a fan of those shows, as well as the long-awaited BB movie spinoff El Camino, to get the 411 from the man who started it all with the legendary Breaking Bad, which you will see I tell him is one of the two perfect television series I have ever seen (you will have to watch to find out the other one, but he agreed it was a good choice).

After BB finished its six-season run in 2013 it appeared that would be the end of it, but Gilligan and Peter Gould managed to do the seemingly impossible and come up with a prequel series in Better Call Saul that now after five seasons is coming closer to catching up with the first season of BB.

As for the show that started it all, a return to that seemed off the table until Gilligan got inspiration to write and direct El Camino: A Breaking Bad Movie with Aaron Paul continuing the journey of Jesse Pinkman. Once again, Gilligan managed the impossible and made a hell of a great sequel as it were, and he talks about how it came about, working again with Paul, pulling off a surprise cameo with Bryan Cranston (who secretly flew into New Mexico on his day off from his Broadway show Network for a flashback encounter with Jesse and Walt in a local cafe) and so much more. He also talks about Better Call Saul and cannot sing the praises enough of stars Bob Odenkirk  and Rhea Seehorn.

Please watch our uncut interview that also includes his words about the late great Robert Forster, who had appeared in a memorable BB episode and returned for one of his final appearances in El Camino — a couple of scenes I think are Emmy worthy in and of themselves.

To watch the edited version of our conversation, check out the video above. To watch the entire half-hour talk (and I hope you do), watch here: