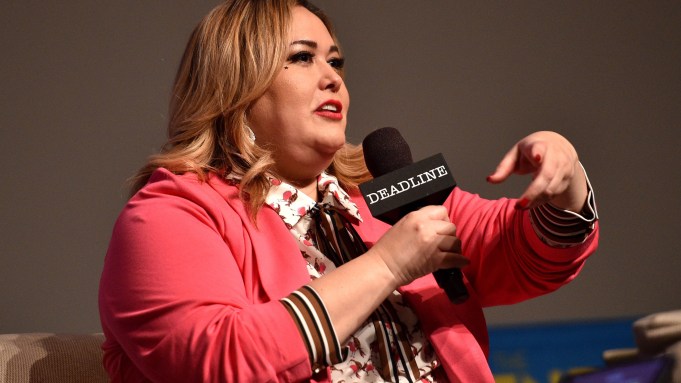 For Vida showrunner Tanya Saracho, it was important to make her family drama set in East L.A.’s Latinx community as authentic as possible. “The show is about ‘gente-fication’ — the gentrification of a Latinx space by another Latnix,” she told the packed crowd last month the Deadline’s The Contenders Emmys event. “In practice, we didn’t want to be ‘gente-fiers,’ so we tried to only film in East L..A.”

The Starz drama that premiered earlier this month focuses on two very different sisters, Emma (Mishel Prada) and Lyn (Melissa Barrera), who return to their old neighborhood and are confronted by the past and shocking truth about their mother — she was married to a woman named Eddy (Ser Anzoategui). This unfolds into a story about identity, familial drama, and, of course, gentrification.

During the Contenders event, Deadline reporter Dawn Chmielewski was joined onstage for the Vida panel by Saracho, Prada, Barrera, Anzoategui and Chelsea Rendon.

Saracho says, “We have usually been white-washed or brown-faced,” and that they wanted to get iconic images of the community right and build the show from “the inside out.”

“It’s just a family, the only difference is we haven’t gotten a chance to tell it like this,” she adds. “My entire writers’ room is Latinx — most of my directors are Latinx. You can’t tell a story like this without that kind of formula.”