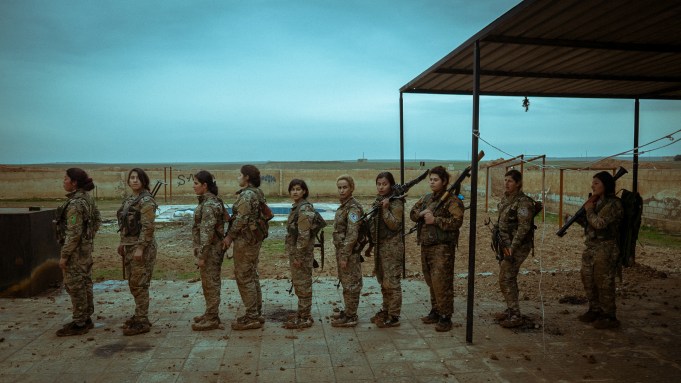 Showtime is launching Emmy-winning doc series Vice on Sunday March 29 and the ViacomCBS-owned cable network has unveiled a new clip for its premiere episode set in a Syrian camp.

The debut of the series on Showtime – the series previously aired on HBO – follows London-based correspondent Hind Hassan as she travels to the Camp al-Hol in Northeastern Syria, where tens of thousands of women and children who once lived under ISIS are currently being held. As you can see in the clip, Hassan investigates how a power vacuum has left brigades of radicalized ISIS women revolting against Kurdish security personnel, fighting for a resurgence of the terror group in the region.

Hassan’s segment is one of a number of international stories that will air across the 13-part season with other reports including an exploration of the growing human rights crisis in India and a look at how Russian republic Dagestan became an incubator for the world’s top wrestlers and MMA fighters.

The series will also now tackle the global Coronavirus pandemic, something that neither Vice, nor Showtime, was expecting to be part of the series.

Showrunner and exec producer Beverly Chase told Deadline that the outbreak has been challenging for the show, which has filmed around half of its first season before Coronavirus took hold. “The show is challenging to make in the first place, we now just have a new challenge. We’re really lucky that the series has been in production since November. We did have to call some people back from the stories that they were shooting… now we’re pivoting to figure out ways to cover Covid and the world that we’re heading into,” she said.

Most episodes will feature two segments with the premiere also featuring an inside look at a new form of cell phone hacking. Correspondent Krishna Andavolu investigates how young video-gamers-turned-criminals stealing millions of dollars through an underground practice known as SIM swapping.

The series ran for six seasons on HBO between 2013 and 2019. Chase said that the Showtime version was similar to the WarnerMedia-owned network’s series. “We’re going to go places no one else is going and tell stories no one else is telling, but we’ve got a new generation of diverse storytellers as well as some of the best reporters that you saw on the HBO show,” she added.