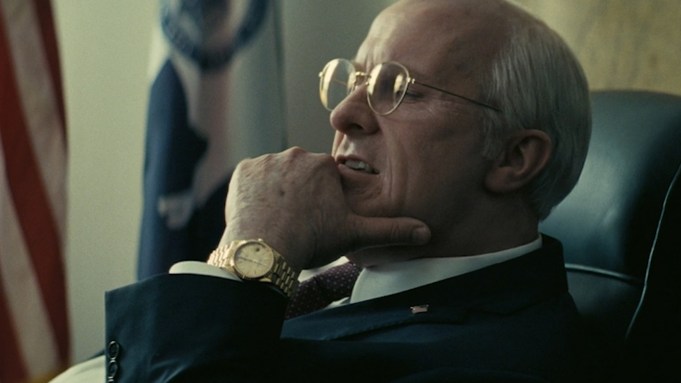 No one might have been asking for it, but Oscar winner Adam McKay has turned the season into a Dick Cheney Christmas. As he also showed with The Big Short, writer-director McKay has evolved into one of the best cinematic satirists we have seen this side of Billy Wilder and Preston Sturges. Choosing the life and crimes, er times, of former Vice President Dick Cheney as subject matter for his latest work, appropriately titled Vice, he makes the most unlikely movie biopic in a long while.

This generally is structured as a linear biopic, beginning with Cheney’s less-than-promising start in Wyoming through his various positions in and out of several Republican administrations and finally to his ascendency to VP under George W. Bush, where he essentially struck a deal to become the “shadow” president and, in turn, the most powerful veep we have ever had. He even led the search VP committee before eventually choosing himself, a prime example of how he orchestrated everything. Indeed Vice follows the trail but none of the rules in painting a scathing portrait of a man driven for power and finding it on his own terms. Vice shows us how Cheney created the blueprint for the political environment we are living through now, and much like the current occupants of power in Washington D.C., he was in it for himself and his particular vision for the country, no matter how many the lies or what the cost.

Although McKay’s brilliant screenplay attempts to connect all the dots of this man’s unique rise to the upper echelon of politics, he does so with at times wonderfully comic and unconventional methods. They include the bold move of rolling the end credits halfway through the movie as Cheney and his family frolic in their native Wyoming, seemingly content to live out their days outside of public life. It is the perfect happy ending for Cheney, and depending on your political persuasion (certainly McKay’s) for the country. Except it is not, as the credit roll is just a fantasy sequence, a hilarious preamble to Cheney’s defining moments in becoming vice president and pulling the strings of his puppet named W.

Watching this film, though, I kept thinking that while many will come away horrified at what Cheney did, others probably will sit back and say this is exactly why they liked the guy. I don’t know if that is what McKay intends, but this is at times a generous look at the man who would be king, depending on how you want to see it. The truth is, Cheney also was the architect of the current polarization that has infested American politics and turned the definition of democracy on its head.

McKay, as in Big Short, has inspired casting to pull this all off, including some who were in that 2015 film including star Christian Bale, who transforms himself into Cheney in a pitch-perfect impersonation and wickedly funny performance. He had the help of the terrific makeup and hair artisans to pull it off at each point in Cheney’s career, but employing his standard weight gain to approximate Cheney’s physical appearance, it is hard to see the actor in this. He uncannily becomes Dick Cheney, and it is a remarkable feat. Matching him every step of the way is Amy Adams as his wife, Lynne, an equally ambitious partner in all of this. Adams superbly hatches the idea that if Cheney is pulling the strings of George W. Bush, Lynne is pulling the strings of her husband. The relationship is positively Shakespearean, even to the point of some pillow talk between the pair done in iambic pentameter rhythms right out of Macbeth, or so it seems.

Excellent in support are Sam Rockwell, who nails George W. Bush; Steve Carell as the affably laughable Donald Rumsfeld; and Tyler Perry, elegantly taking on Colin Powell. Alison Pill and Lily Rabe also have nice moments as the respective Cheney daughters, Mary and Liz. Jesse Plemons is the narrator of this ever-twisting tale in a clever bit of bookending that pays off well. A post-credits scene involving a political focus group also is nicely paid off in a way that firmly reminds us this is a comedic enterprise, even though some might find the whole thing more akin to a horror movie.

This kind of smart, sharp, relevant, funny, and urgent filmmaking is increasingly rare these days. McKay should be applauded for keeping a great tradition alive. Producers are Megan Ellison, Dede Gardner, Jeremy Kleiner, Brad Pitt, Will Ferrell, Kevin J. Messick and McKay. Annapurna opens the film wide on Christmas Day. Check out my video review of the film by clicking the link at the top.

Do you plan to see Vice? Let us know what you think.