Late-Night Shows Win Back Their Fifth Emmy Nom Slot After Showrunner Campaign
Read the full story
May 10, 2021 6:14am 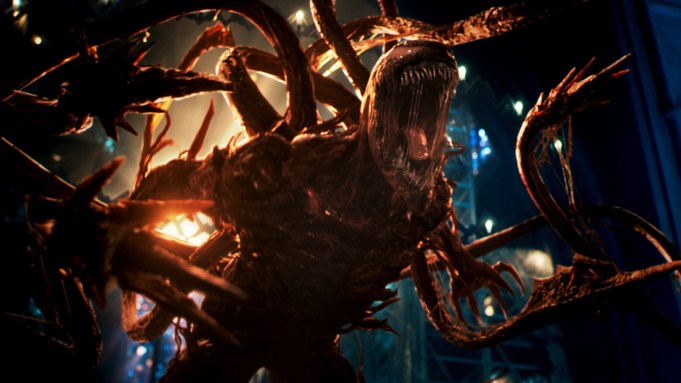 Sony has just dropped a new trailer for their Marvel Spider-Man spinoff Venom: Let There Be Carnage. The sequel to the $856M WW grossing 2018 movie is scheduled to hit theaters on Sept. 24. Take a look.

“I’ve been thinking about you Eddie. Because you and I are the same. Every decision you’ve ever made — who do we leave behind and how do we leave them?” says Woody Harrelson’s villain Cletus Kasady aka Carnage in the trailer’s voiceover to Tom Hardy’s Eddie Brock (aka Venom). We first caught a glimpse of Carnage at the end of the first movie, and now he’s full-time in part 2.

What’s clear in the sequel, directed here by Andy Serkis, is that there’s more Jekyll and Hyde humor being delivered, an aspect which made the first installment stand out.

Before Warner Bros. broke all October records with the opening of their R-rated DC Joker with $96.2M in 2019, Venom previously made box history in the fall month with a $80.2M domestic opening. The pic finaled at $213.5M in U.S./Canada and $642.5M abroad.

The ultimate plan here for Sony down the road with their portion of the Spider-Man sector of Marvel is to ultimately make a Sinister Six feature; that group comprised of bad guys to the webslinger of which Venom and Carnage were members at different points in time.