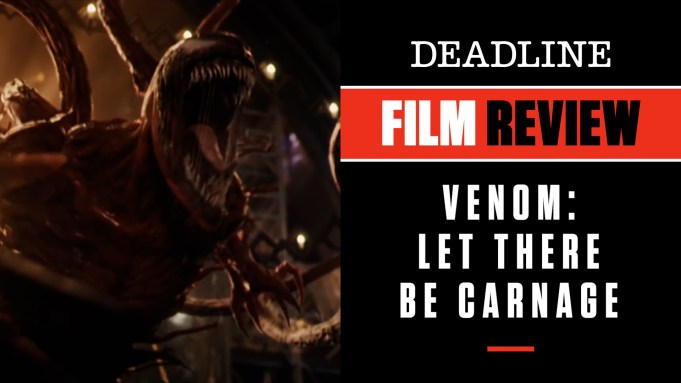 After the 2018 origin story Venom was critically reviled but a commercial smash at $825 million in worldwide box office, a sequel to the stand-alone flick spotlighting one of Spider-Man’s most notorious villains was inevitable. This time, star Tom Hardy, who plays the title role in Venom: Let There Be Carnage, has apparently taken matters into his own hands, gaining his first writing credit with a Story By credit shared with screenwriter Kelly Marcel. He also had a hand in bringing Andy Serkis aboard to direct this one instead of Venom helmer Ruben Fleischer.

With all the origin stuff out of the way, Venom: Let There Be Carnage clocks in a bit over a tight 90 minutes (and actually starts end credits at the 82-minute mark), setting up the battle royale comic book fans have been craving: Venom vs Carnage. Consider this — for some in the Marvel Universe as well as the Venomverse, a matchup on the scale of Godzilla vs Kong — and the results are, well, loud and frenetic, a CGI feast of effects both visual and aural that ought to satisfy those who want to submit to it. Apparently that is a large number of aficionados out there.

Of course, Hardy is at the center here playing hard-edged reporter Eddie Brock, whose body was invaded by this symbiote alien Venom; the pair, after the chaos of the initial film, have been living together as the ultimate odd couple. Brock just can’t seem to escape his altar ego, whose motto is “eat or be eaten,” but they do complement each other in the vein of Jekyll and Hyde for the new age. Brock is riding high having secured a scoop: the final interview with death row inmate and psychotic killer Cletus Kasady (as teased at the end of Venom) played by Woody Harrelson in a nutso comic book turn. Kasady is under the impression he has a sympathetic friend in Brock, but that really is not quite correct. Nevertheless, the interview takes place, and soon after Kasady is strapped up for execution his own symbiote Carnage jumps into his body and all hell breaks loose. After much destruction he lands back on the street and the setup is in place for a showdown we know is coming between Eddie/Venom and Cletus/Carnage.

‘Venom: Let There Be Carnage’ To Tee Off A Blockbuster October At Domestic B.O. – Weekend Preview

Along the way, Cletus reunites with his true love, Shriek/Frances Barrison, who has her own superpowers and is every bit as much of a psycho as her boyfriend. She is played by Naomie Harris (who also turns up as Moneypenny in No Time to Die this week) and this is a character whose voice has been silenced for 25 years but now is finally being unleashed. Brock finds himself also at odds with Stephen Graham’s cranky and deflated Detective Mulligan of the SFPD just to add a little more conflict to the stew. Then there is the return of his ex, Anne Weying (Michelle Williams), who has a new BF (Reid Scott) and a more serene lifestyle after finding her relationship with Eddie was just too crowded when Venom (who loves her by the way) came into the picture. Nevertheless, she is still a booster for the man as she truly understands why he just can’t let go of Venom, even when Eddie and Venom do come to a parting of the ways at a crucial moment of need this time around.

So Serkis certainly knows his way around popular franchises, having been an actor in the Lord of the Rings films, Planet of the Apes films, and playing Snoke in Star Wars. Taking on this CGI effects-heavy project is a piece of cake after all that, but here he proves adept behind the camera in focusing on the bizarre coupling of Eddie/Venom and even finding the comedy within, which should be recognizable to anyone who has ever had a slob as a roommate. Although this film is strictly for Venom comic book fans, it is sleek and sly enough to survive a heavy assault on the senses, especially once Carnage comes into play. The subtitle Let There Be Carnage speaks the truth.

Hardy has found a character he can sink his teeth into and he is appealing here, far more likeable than what we had to endure with his Bane in The Dark Knight Rises, and at least his vocal work as Venom is intelligible. Harrelson chews the scenery and seems to be having a great time; he is a good choice as the ultimate villain here. Fans already know this, but in a movie from Marvel (even one as in this case that was made “in association” with Marvel) you must stay through the end credits or at least partway through those credits for a final sequence. The vast amount of artisans who worked on the special effects are deserving of star billing, even in the age of CGI where it is so difficult to come up with anything new to impress us.

Check out my video review above with scenes from the film. Do you plan to see Venom: Let There Be Carnage? Let us know what you think.