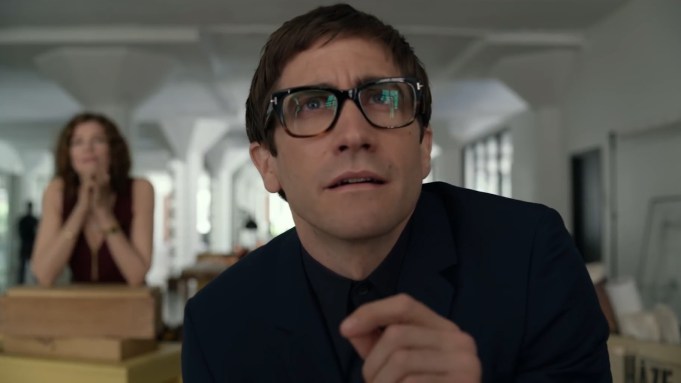 In 2014, Nightcrawler was among my top five films of that year, a wickedly funny and dark take on the local news ratings game and the bottom feeders who help sensationalize it. Dan Gilroy wrote and directed it brilliantly, and it starred Jake Gyllenhaal and Rene Russo in career-best performances. Now the three of them (Gilroy is also married to Russo) have reteamed for another dark and often funny look at the pretentious art world — not necessarily the artists themselves but those who exploit them to their own ends and enrichment. The film is called Velvet Buzzsaw and it premiered at Sundance over the weekend, just five days before its debut on Netflix today (and in limited theatrical play).

While it doesn’t reach the heights — or depths — of Nightcrawler, it is fitfully amusing and entertaining as a satirical horror film, one that turns into a murder mystery that gets really weird in the second half. Clearly that was Gilroy’s intention for a movie that seems to be saying that the artist somehow is being exploited in ways that definitely aren’t pure, and like Nightcrawler there are more than enough bottom feeders to stand in line to do the trick.

Opening with a sequence set at a Miami art show, we meet some of the key characters involved in this trade including Russo’s take-no-prisoners shrewd gallery owner, Rhodona Haze (love the name), who never met an exhibit she didn’t want to control. There’s also a ruthless and clever rival named Ricky Blaine (Peter Gadiot), a veteran curator on the fringes named Gretchen (Toni Collette), as well as bisexual art critic/author/gadfly Morf Vandewalt, played with the right blend of creepy smarts by Gyllenhaal, who is turning into a great character actor of late (even with a tendency to go over the top occasionally as he did in another Netflix flick, Okja). Here he is perfect as a guy who sees a mystery haul of over 100 heretofore unknown canvases as the greatest discovery since King Tut. It is those paintings that are at the heart of the plot.

Aspiring agent Josephina (Zawe Ashton), who works with Haze, stumbles upon a remarkable cachet of paintings in an abandoned apartment near hers. It turns out the painter, Dease, died before he could take them to the dumpster. She sees an opportunity to exploit the dead artist against what turns out to be his wishes to have his work remain anonymous. Soon this discovery has this part of the art world ablaze with the idea they have something very special and very valuable. So why then do so many people who come into contact with these paintings start dropping dead in ways that aren’t pleasant? Who is killing them? And why?

To give away more of this increasingly gruesome plot is to spoil a good time, and I wouldn’t want to do that. Suffice to say the cast is all in on this with Russo, Gyllenhaal, Collette and John Malkovich as an artist way beyond his prime taking the acting honors. Fine work is also supplied by Billy Magnusson as Haze’s assistant, who botches his big assignment; Daveed Diggs as a new love interest for Josephina after she blows off her brief affair with smitten Morf; and Tom Sturridge.

Special plaudits goes to composer Marco Beltrami whose score is right on the money, a work of art itself. Jennifer Fox produces. Click the video above to see my review with scenes from the film.

Do you plan to see Velvet Buzzsaw? Let us know what you think.