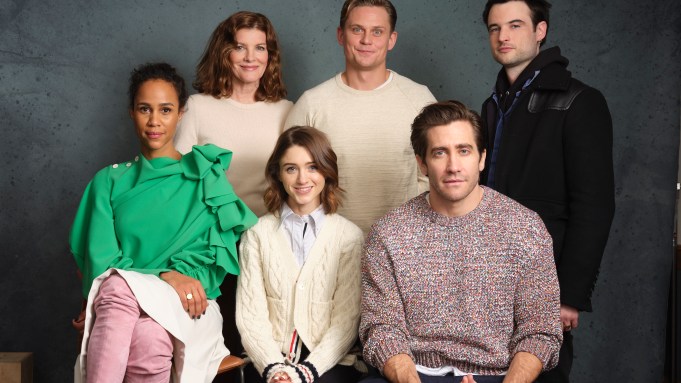 Given their previous Nightcrawler success, the re-teaming of writer/ director Dan Gilroy, Jake Gyllenhaal and Rene Russo made Velvet Buzzsaw a pretty intriguing prospect at Sundance this year. The film hits Netflix on Friday, and some of the stellar cast dropped by Deadline’s Studio to discuss their experience making the off-beat horror.

“Very simply put,” Gyllenhaal said, “it’s a horror/satire about the art world, and about art being usurped by the financial world and greed.”

The film features a supernatural force that punishes the unscrupulous. “It’s one of those true-to-life, absolutely not true-to-life Dan Gilroy movies,” Gyllenhaal went on. “It really is a horror film/thriller/satire—a parable for modern times.”

Russo heard the bones of the idea from her husband Gilroy early on, she said. “Dan went to a museum in Upstate New York—DIA—and he came home and said, “I’ve got a great idea for a thriller set in the contemporary art world.’”

For Russo, the project was a no-brainer, and she joked that she petitioned Gilroy right away. “At DIA, they have a weird installation with mice running around, and it’s a little bit of a freaky place, it’s got a weird spirit; it used to be an old mill. I just thought, ‘That’s great; are you going to write me a part or not?’”

Reuniting with Gyllenhaal was a very welcome experience too, as his acting style is so immersive and transporting. “When I’m working with him, he is so zeroed in on you,” she said, “I find I’m watching a movie and I lose my place completely.”

Other cast members were gripped by the script’s unusual tone right away. In seeing the first few pages for her audition, Zawe Ashton said, “I had a very visceral experience. I could just feel something naughty and strange and genuinely odd was going on.”

Tom Sturridge found it “completely bonkers”, he said. “I had read nothing like it and I had felt like I was inside a man’s disturbed mind.”

Gyllenhaal, in trademark fashion, expressed his shock at everyone’s shock. “I was deeply moved, and was weeping by the end of it,” he joked.