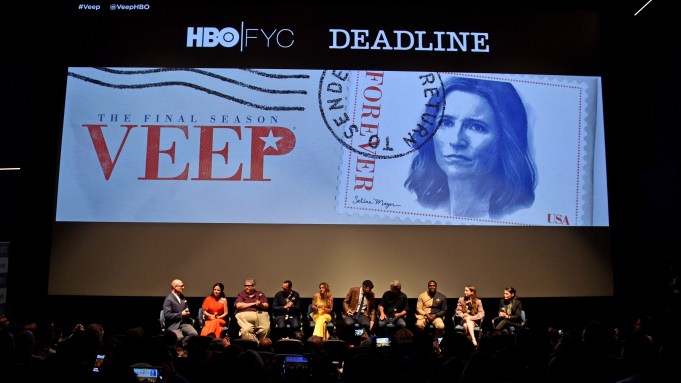 “It’s a hugely proud piece of my life,” says Julia Louis-Dreyfus of the seven seasons of the now concluded and much acclaimed Veep. “It’s the highlight of my career,” added the eleven-time Emmy winner this week at a packed Deadline Screening Series panel.

“Accolades aside, which are wonderful and everything, I actually mean the fact of making the show which has been incredibly challenging and incredibly joyful and very difficult and very exalted, all at the same time,” the woman who portrayed VP and then POTUS Selina Meyer on the relentlessly scathing HBO satire.

In what has to be one of the most fun, insightful and out-and-out moving panel we have ever done (and you can watch some highlights in the video above) Louis-Dreyfus was joined on-stage in West L.A. by executive producer/showrunner David Mandel, plus cast mates Tony Hale, Anna Chlumsky, Timothy Simons, Gary Cole, Sam Richardson, Sarah Sutherland and Clea DuVall.

A well deserved multiple past winner (Yes, I am a fan, check out my finale review here); Veep is up for nine Emmy nominations this year.

If Louis-Dreyfus wins next month, the actress will break her current tie with Cloris Leachman for the most acting wins by a performer in Emmy history – a record nine acting wins. The actress also has three producing Emmys too.

Before the wonderfully riotous panel (which, again, you can watch in the video above) started, attendees were treated to an exclusive BTS look at Veep‘s last season and poignant last moments. Crafted by Madel, here’s the very funny, very bawdy and deeply felt “Final Season Unseen” video itself:

Of course, it has to be recognized that one of the things that made the final season of Veep and perhaps this panel all the more significant is that it occurred after Louis-Dreyfus had to take several months off between the penultimate season and the end to wage a successful battle against breast cancer.

“We all love each other a little too much,” Hale told Louis-Dreyfus and the crowd at the panel on August 20. “ I was so excited about tonight because now is about the time we’re gearing up to shoot another season and I was like, I get to see everybody. This is my Season 8 right here,” the man who brought literal and figurative bagman Gary Walsh to life added to laughs from both the audience and his fellow Veep panelists.