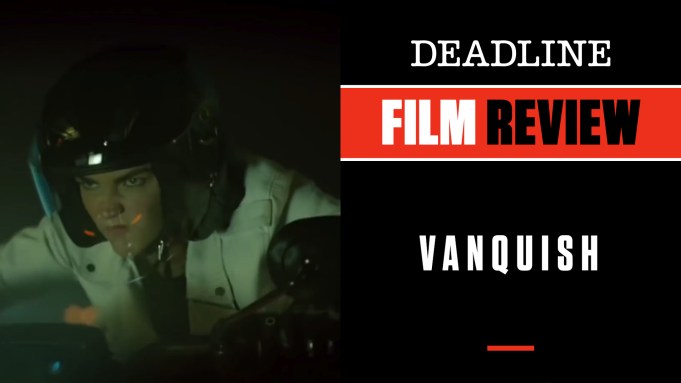 The R-rating warning for Lionsgate’s murky new action flick, Vanquish, says pretty much all you need to know: “bloody violence, language, some sexual material, drug use.” In fact, all that would have been a better title for this routine and derivative action movie where Oscar winner Morgan Freeman seems to be just going through the motions for an easy paycheck.

Vanquish is a long way from the likes of Freeman movies such as The Shawshank Redemption, Million Dollar Baby, and Se7en — a very long way indeed. Here as corrupt retired cop Damon, who was nearly killed in the line of fire, Freeman gets to play the whole thing in a wheelchair in an elaborately appointed oceanside mansion where he operates a drug and prostitution ring of sorts. The considerable cash he has made doing these illegal operations is in the millions and he wants it now, but how does he retrieve it from those who don’t cooperate?

That is where caretaker Victoria (Batwoman alum Ruby Rose) comes in. She is trying to turn her life around after a shady career as a Russian drug courier for gangsters. Now, with daughter Lily (JuJu Journey Brener) in tow, she is just looking to the future. Damon — who’s a nice ex-cop, in her mind — is helping her out and taking care of Lily’s medical bills as well as helping Victoria as she is on parole. But her past skills are now of great use to Damon, who enlists her to return to her considerable talents as an assassin in order to retrieve his money.

In order to do that, he has Lily being held hostage — motivation enough for Vic to spring into action, which she does without missing a beat. Before you can say “bang-pop-bang,” she has jumped on her motorcycle and headed after the hard-edged bad guys (but, actually, who isn’t in this thing?). Lots of bloody, violent confrontations follow as she does in a number of one-dimensional villains in order to complete her task and get her daughter out of harm’s way.

Everyone in this film from the crooked cops (among them Patrick Muldoon and Nick Vallelonga, the latter of Oscar-winning Green Book fame) to the criminals is bad news. Best of all for Damon is that, in addition to all the weaponry Victoria needs, she also gets a body cam so he can follow along with all the action in real time, watching it from the comfort of his wheelchair as if it was an episode of Murder, She Wrote. Don’t you just love technology? It also gives Freeman the opportunity to make this all more than a cameo as he has a front-row seat as if he were with her.

Unlike the recent man-against-the-Russian-mob thriller Nobody, in which the similarly aging Christopher Lloyd actually got to join star Bob Odenkirk in the gunplay, Freeman is basically just calling the shots, not shooting them. That is left to Rose, and she proves to be an able, if uninspired, female assassin of the sort we have seen quite a bit of in movies since La Femme Nikita became a surprise hit. She acquits herself as well as can be expected in a role requiring an acting range of A to B.

Like his cast, director-writer George Gallo has seen better days. Hard to believe that this routine action time-waster comes from the same man who gave us screenplays for Midnight Run and Bad Boys, among others, but he uses every learned trick to keep it moving at a fast pace. At least it is over quickly.

Producers are Nate Adams, David E. Ornston and Richard Salvatore. Lionsgate opens it Friday in theaters and digital. Check out my video review with scenes from the film at the link above.

Do you plan to see Vanquish? Let us know what you think.