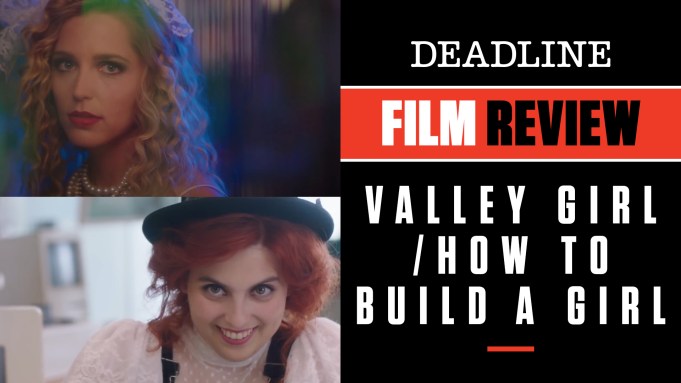 It’s Mother’s Day weekend, so what better time to sit back and take in two new movies about teenage daughters in the music scene that just might make their moms squirm?

Actually, parents will probably be fine with it all, but these two flicks — the musical remake of 1983’s Valley Girl and the semi-autobiographical British comedy How to Build a Girl — clearly are aimed for the older-teen set they are really about. And the latter, thanks largely to star Beanie Feldstein, feels fresh and smart as opposed to the former — which, though trying hard to please, simply can’t escape my fond memories of its ’80s inspiration.

First up, this re-imagining of director Martha Coolidge’s cult comedy hit, Valley Girl, which gave the world a quirky and charming introduction to Nicolas Cage. He co-starred as a punk-rocker love interest to “Valley girl” Deborah Foreman in a true romance of two young Southern Californians from different sides of the track, as it were. It wasn’t a masterpiece, but it had a certain style and attitude that was refreshing and stood out. As unlikely as it may seem, it has now become fodder for a jukebox musical Technicolored-rosy remake whose stars actually sing ’80s hits woven into the plot — “Girls Just Want to Have Fun”, “Boys Don’t Cry”, “We Got the Beat” and so on — while telling the same story. Julie (Jessica Rothe), a shopping mall-dwelling girl from the Valley, becomes infatuated with a Sunset Strip punk rocker named Randy (Joshua Whitehouse), much to the chagrin of her fellow Valley girl pack and dopey, self-obsessed boyfriend Mickey (YouTuber Logan Paul, who is introduced to the strains of, you guessed it, “Hey Mickey!”).

The intertwining stories of love and heartache, fun and finding your true self are woven together with a new plot device as the present-day Julia (Alicia Silverstone) tells the tale of her relationship with Randy to her own teenage daughter, bridging all the flashbacks to her glorious self in the 1980s. On the plus side are the nice color-coordinated fashions, some serviceable choreography from Mandy Moore — who achieved far greater results from her dancers in La La Land, done just before this one — a nice selection of 80’s tunes and a good lead performance from Rothe.

The problem for me is that Whitehouse is no Nicolas Cage, and this version of Randy completely lacks the truly offbeat qualities Cage brought so memorably to the role. Whitehouse’s version looks like he easily could have been one of her Valley BFs and is bland at best. The chemistry just doesn’t click. It is, however, a lot better than Julie’s cringe-inducing scenes with Paul, whose inexperience as an actor is on full display.

This film was made in 2017 and scheduled for release in the summer of 2018 but was pulled off the MGM schedule shortly after Paul’s controversial antics on his YouTube channel caused major PR problems. Whether that was a reason for this long delay — as well as its pivot from theaters to VOD — I don’t know, but the film would be better off without him. Certainly you can see with his reported 21.4 million YouTube subscribers that this kind of casting, with an eye more toward box office than talent, might have been advantageous for a lightweight romp like this, but there are much better choices out there folks, eh Mickey?

The script is by Amy Talkington. Matt Smith and Steven J. Wolfe are producers. Director Rachel Lee Goldenberg keeps it lively, but if you want to see the real deal for a film taking a flimsy premise and turning it into a smart musical, go back to the real 1980s and check out Lyndall Hobb’s terrific 1987 “beach party” reunion of Frankie and Annette, now grown with kids, in Back to the Beach. Orion Classics puts this Valley Girl on VOD and digital today.

For a better time, check out How to Build a Girl, a comedy with the right attitude that premiered at last year’s Toronto International Film Festival. Based on Caitlin Moran’s semi-autobiographical book (she wrote this clever adaptation as well), it has Beanie Feldstein — so good in supporting roles in smart, female-driven, coming-of-age comedies Lady Bird and Booksmart — rocking a British accent and getting a full-fledged lead role. She plays Johana Morrigan, a 16-old-year who talks to her wall full of inspirational female mentors from Sylvia Plath to Charlotte Bronte and Maria von Trapp, asks for advice and they give it in delightful ways as they come to life right there in their photos.

British Journalist Caitlin Moran On Coming Of Age Drama ‘How To Build A Girl’: “It Was Beanie Or Bust” – Toronto Studio

One day her brother, Krissi (Laurie Kynaston) sees an ad asking for rock critics for a small alternative music magazine, and he shows it to his sister, who sparks to the idea and writes a sample review of the Annie cast album (!). Surprise, surprise — she gets called in by the oh-so-hip editors on the basis of it, but it is really more to have fun with her than take her seriously. Still, they keep her around as a kind of mascot for their amusement as she writes more reviews. After they finally say she is writing like a teenage girl, she says, “But I am a teenage girl.”

Nevertheless, she also writes features and grabs one with a hot singer named John Kite (Alfie Allen), who she also chases after but gets too flowery in her prose because of the crush. After getting stinging criticism, she adopts the pseudonym Dolly Wilde and reinvents herself as a rock critic who hates everything, apparently. She becomes a shocking success, goes viral and hits the fast lane, sexually and otherwise, as this quirky coming-of-age story finds this girl with two identities eventually searching for who she really is.

Among the rest of the cast, Paddy Considine and Sarah Solemani have nice moments as Mom and Dad, and Allen is very fine. But this is Beanie’s show, and she makes it a lot of fun to watch. Director Coky Giedroyc guides it all with style as How to Build s Girl proves how to build an original teen comedy that resonates.

Alison Owen and Debra Hayward are producers. IFC Films is the distributor. It’s available now on VOD and digital. Check out my video review of both How to Build a Girl and Valley Girl by clicking the link above.

Do you plan to see one or both? Let us know what you think.