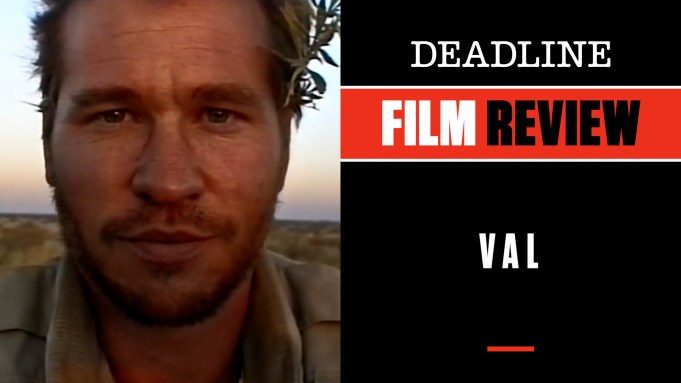 I have seen more than my share of show business documentaries in every shape and size, every variation of truth and lies, and every name from A to Z, but I have to say I have never seen one quite like Val, a very personal and comprehensive deep dive into the life and times, triumphs and tragedies and all else regarding actor Val Kilmer. It premiered today as an official selection of the Cannes Film Festival.

Kilmer, 61, as it turns out, has been his own cinematographer virtually his entire life, and he carefully turned over thousands of hours of 16MM footage, home movies, Beta, DVs and every other format to directors Leo Scott and Ting Poo for this all-encompassing portrait of the life of an artist — one made possible by the relentless practice Kilmer had of documenting everything, and I mean everything, in his life from a very early age. Thus we see his early years in Arizona, his life with his family — including most poignantly his brother Wesley, who died at age 17 in a drowning accident due to his epilepsy — his earliest acting appearances at school including the prestigious Julliard, where he was the youngest acting student (at 17) ever admitted. Best of all, though, is the previously unseen and eye-opening behind-the-scenes footage he took at every job including his 1983 Broadway debut in Slab Boys, where he catches co-stars Kevin Bacon and Sean Penn mooning his camera among other things.

And then there is some really cool stuff on the sets of many of his movies including Top Gun, Top Secret!, The Doors, Batman Forever, Tombstone, most fascinating of all a confrontation (presented here in audio excerpts only) with his The Island Of Dr. Moreau director John Frankenheimer, who repeatedly tells him to stop filming and put down the camera, something Kilmer refuses to do. It is a rare insight into at an intense battle between actor and director you rarely get a firsthand view of. That is the 1996 movie with Marlon Brando that went completely off the rails, and Kilmer has the goods.

‘Val’ Trailer: Val Kilmer Says Docu Is “A Story About My Life, But It’s Also Not My Life”

A major part of this docu, though, deals with the Val Kilmer of now, and his diagnosis of throat cancer during his one-man play about Mark Twain, Citizen Twain. He now talks through a vocal apparatus due to his tracheostomy, but it hasn’t stopped him from trying to keep a career, no matter how devastating this health crisis has been. Particularly moving are current-day excursions to autograph shows, where Kilmer tries to sign as much memorabilia as possible before exhaustion sets in. The film doesn’t stint on showing the toll it takes on him, there and other places. There is also a sad scene where he is introducing his movie Tombstone at an outdoor revival screening in Texas, and as the film plays in the background he is seen wandering off by himself, a kind of heartbreaking moment to watch as we hear him describing his life now as basically selling his past. Son Jack Kilmer narrates the film with his father’s words from his 2020 bestselling autobiography I’m Your Huckleberry, and the family connection here is also a very nice touch.

Val is an exhilarating, honest and raw look at the life of an actor, this actor, with all the trials and tribulations that go with a 40-year career in front of audiences (he is in the upcoming sequel Top Gun Maverick), the victories and defeats, the will to carry on despite being dealt a devastating blow for any performer, especially one who finally achieved a dream on getting back on stage with Mark Twain. Ultimately this is a very rewarding look at a life, with cinematography by, of course, Val Kilmer.

Check out my video review with scenes from the film at the link above. Producers are Kilmer, Scott, Poo, Andrew Fried, Dane Lillegard, Jordan Wynn, Brad Koepenick and Ali Alborzi. Amazon will release the film July 23 in theaters and begins streaming it on August 6.