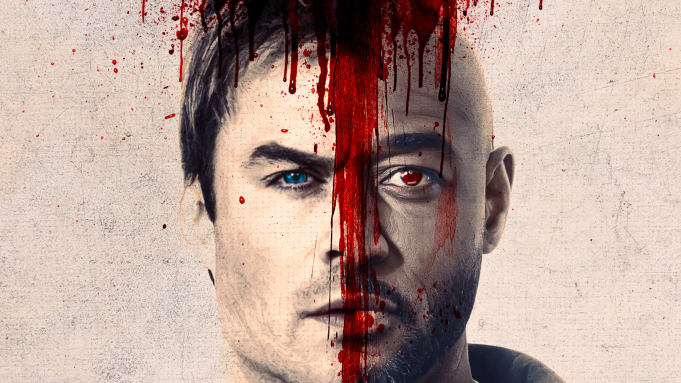 The V Wars are coming to Netflix and, as the just-released new trailer makes abundantly clear, there will be blood. V Wars premieres on the streaming service on December 5 and adapts the fanged, sci-fi horror epic that author Jonathan Maberry launched in 2012 with IDW Publishing of San Diego.

The premise is the desperate struggle to avoid human extinction in the wake of bio-medical outbreak that sets the stage for  a war between vampire factions and humanity, aka the planet’s new all-you-can-eat buffet. One of the intrepid heroes trying  to cancel the free lunch is Dr. Luther Swan, portrayed by Ian Somerhalder, who knows plenty about toothy bloodsuckers after portraying one for 171 episodes of The Vampire Diaries as the costar of CW shows that ended in 2017 after eight supernatural seasons.

Here’s the official synopsis from producers: “Dr. Luther Swann (Ian Somerhalder) enters a world of untold horror when a mysterious disease transforms his best friend, Michael Fayne (Adrian Holmes), into a murderous predator who feeds on other humans. As the disease spreads and more people are transformed, society fractures into opposing camps pitting normal people against the growing number of these ‘vampires.’ Swann races against time to understand what’s happening, while Fayne rises to become the powerful underground leader of the vampires. “