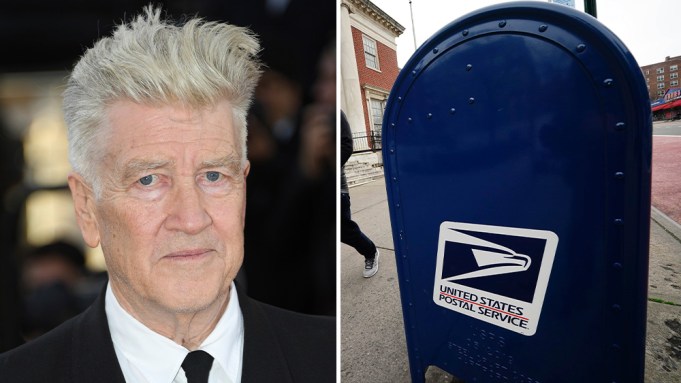 David Lynch took a detour today during his laconic Los Angeles weather report to walk straight into the controversy over the Trump administration’s war with the United States Postal Service.

“Today, I’m thinking about the postal workers and how much we need and appreciate them,” the Twin Peaks kingpin said Monday online, as you can see in the video above.

The comments mark one of the few times Lynch has deviated from his deadpan delivery of SoCal meteorology since the acclaimed filmmaker started the daily combo of hard data and a look out the window of his home workshop in May. Lynch’s YouTube weather reports have become a post-modern must watch for locals of late, with NPR stations in the Southland broadcasting them as well.

Today’s remarks also come as Donald Trump is seemingly weaponizing the fiscally hemorrhaging USPS’ funding as a way to score an advantage in his increasingly tight race for reelection against ex-VP Joe Biden.

The USPS, which is a public service, has undergone harder than usual times of late as the coronavirus pandemic has caused a decrease in the amount of mail and packages in transit amidst rising costs. With mail-in ballots looking more and more like how most Americans could end up voting this fall to avoid contracting COVID-19 at polling stations. In a clear tactic of self interest, long time mail-in ballot participant Trump has repeatedly derided the proposed voting process fraudulent as coronavirus cases and deaths rise nationwide.

Coming as LA enters another day of a near record breaking heatwave, the shout-out from Lynch occurred as Speaker Nancy Pelosi (D-CA) today called the House of Representatives back from its summer break to vote on halting any further changes in service and USPS capacity. As Trump once again called universal mail-in voting a “disaster” on Monday, Senate Majority Leader Mitch McConnell broke GOP ranks just a little bit for once.

“We’re going to make sure that the ability to function going into the election is not adversely affected,” McConnell at an event in his home state of Kentucky. “And I don’t share the president’s concerns.”

One-time Bernie Sanders fan Lynch’s thumbs up to the beloved USPS follow affirmations from the likes of Taylor Swift and others in recent days against the ex-Celebrity Apprentice host and actions by his handpicked Postmaster General, a big former donor, and USPS board of directors. This weekend saw demonstrations outside Louis DeJoy’s home by hundreds of Americans angry over the potential disenfranchisement and reports of delivery slowdowns plus expensive sorting machines and mailboxes being put out to pasture.

Lynch’s veiled critique of the Trump gang today was distinctly different than the director’s POV a couple of years ago. In a 2018 interview with The Guardian, nonconformist Lynch declared Trump “could go down as one of the greatest presidents in history because he has disrupted the thing so much. No one is able to counter this guy in an intelligent way.”

After Trump ran the praise up the social media flagpole, Lynch took to Facebook to run the remarks back, claiming they were taken out of context. “If you continue as you have been, you will not have a chance to go down in history as a great president,” the filmmaker addressed Trump in June of 2018 on Facebook. “This would be very sad it seems for you – and for the country. You are causing suffering and division.”