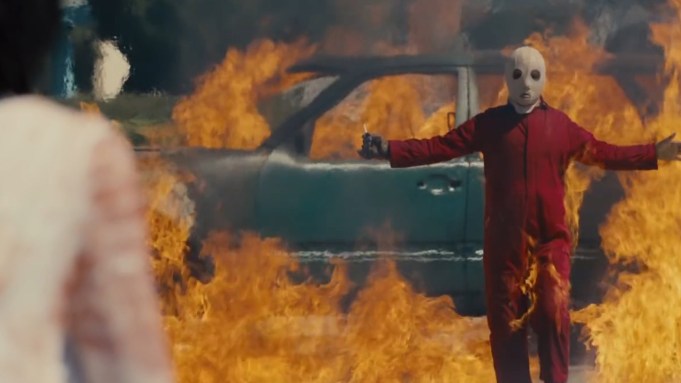 Jordan Peele’s follow-up to his Oscar winning phenomenon Get Out is destined to be a smash hit, and since SXSW, critics have gushed and jumped all over themselves giving it all sorts of interpretations. But at its heart, Us really is just standard horror 101, albeit a very effectively and impressively made effort that borrows from numerous films, and even a little Twilight Zone. There’s a lot of slasher film influence, a lot of zombie influence — even if this isn’t about zombies — a little Cape Fear, some Hitchcock, a bit of Jason, Freddy and Michael Myers, even some Get Out. But this film is no Get Out, in the sense that whatever social meaning it has is best left to be discerned by the viewer. In other words, Peele leaves it up to us.

But let’s get back to The Twilight Zone, the classic Rod Serling series that Peele is rebooting for CBS Access. Watching Us, I couldn’t help but think of other movies that revolved around the idea of meeting your doppelganger — from Bette Davis in the 1960s remake of A Stolen Life called Dead Ringer to Jeremy Irons as a pair of gynecologists in 1988’s Dead Ringers but especially a Twilight Zone episode from the first season called “Mirror Image.” It is a classic episode in which a woman one night meets her exact lookalike and becomes haunted by the image and the memory, convinced that it is an evil force invading her life. Knowing he is into all things Twilight Zone, I’m sure it had to be one of Peele’s inspirations for this script in which Adelaide (Lupita Nyong’o) enters a hall of mirrors one day when she was a child visiting an amusement park and meets her doppelganger. Cut to several decades later, and Adelaide is haunted by the memory so much that she becomes convinced it is that person — the darker side of her, as it were — that is an evil force that has come to get her.

The boogeyman is us, eh? That realization happens as Adelaide and her husband Gabe (Winston Duke) and kids Zora (Shahadi Wright Joseph) and Jason (Evan Alex) take a beach house vacation with another family, Kitty (Elisabeth Moss), Josh (Tim Heidecker) and their kids. One night they look outside and in the driveway are four figures, later discovered to be a family who looks “just like us.” All hell breaks loose, and Adelaide’s childhood horror comes flooding to the surface, the scissors come out and the bloodletting begins. What does it all mean? Why have they come to take on their doubles? From this point it is standard horror tropes, heightened sound effects and music cues worthy of Bernard Herrmann, frightened closeups and a battle to save the family from — themselves. I won’t go further into plot details.

Get Out fans will be looking for social meaning in all this, just as viewers of that 1959 Twilight Zone episode perhaps saw political echoes of the McCarthy era (Serling, like Peele, was interested in allegory). Is Peele saying we are our own worst enemy? Is this a social statement about fear of outsiders in the Trump era? Do we each have two distinct sides — one very human, one very dark? Guess away, but basically what Peele is interested in is bringing many influences on him as a fan of horror and psychological suspense thrillers and creating a pure entertainment meant to make us jump out of our seats, if not our skin.

I was engrossed and attentive, just as the Thursday night preview audience at my local multiplex was, but I never felt truly frightened as I did in such movies A Quiet Place, The Exorcist, both versions of Cape Fear or, yes, Get Out. I don’t feel I need to see this again to figure out what is going on. This is about a fear universal to all of us, I imagine. This is a black family experiencing it, but the color of their skin is irrelevant. That said, how great it is to see a black director making a mainstream horror film with such an exceptional, largely black cast, all of them superb. Oscar winner Nyong’o proves that she is the real deal in her first leading film role, and Duke (Black Panther) also is excellent as are the younger actors Alex and Joseph, who show the essence of great screen acting — using their eyes. In also playing their doppelgangers, they have less flexibility there, with the exception of Nyong’o, whose lookalike gets to chew the scenery a bit more than the zombie-like actions of the others. Moss is equally great, as always for this exceptional actress.

With only his second film, Peele proves that he has a real grip on the film art, in this genre at least, and there is no doubt he has cooked up a reasonably entertaining horror movie grounded in the scariest place of all — within ourselves. I liked it, and it is a cut above most horror movies these days. I just wish I could have loved it.

Producers are Peele, Jason Blum, Ian Cooper and Sean McKittrick. Universal launched it with a strong gross from previews Thursday night and goes wide today. Check out my video review above with scenes from the film.

Do you plan to see Us? Let us know what you think.