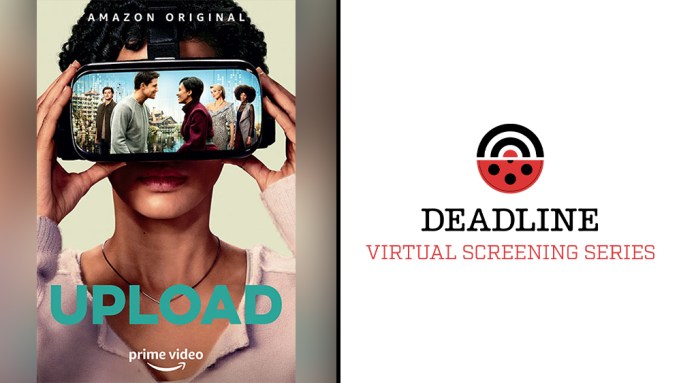 “Definitely a feeling of weird timeliness to it,” state Upload creator Greg Daniels on the connection the 2033-set Amazon series has prophetically proven to have to our times, in good and bad ways.

“We shot that in 2018 January, when we shot the pilot, so it was just the costume designer’s anticipation of what people would be wearing in the future cause the air quality would be bad” the EP explained of a scene from the first episode of the Robbie Amell-led comedy that depicted people protected by face masks when they ventured outside. “Weird things like that keep happening on this show,” Daniels added – as you can see in the video above.

Certainly no one likely ever anticipated debuting during a global pandemic like the coronavirus, yet Upload seemed very much of today – even though it is supposed to take place over a decade in the unpredictable future.

Having launched all 10-episodes of its first near future season on May 1 on Prime Video and renewed for a second season soon afterwards, Upload depicts an America where people can choose to literally upload themselves to a digital afterlife to extend their own life. Of course, like everything in America, nothing comes for nothing, and as the series shifts gears repeatedly from comedy of manners to murder mystery, Amal’s dying Nathan Brown discovers all is not what it seems to be in this life or the digital next one.

Daniels and Amal were joined by Upload cast members Andy Allo, Allegra Edwards, Zainab Johnson and Kevin Bigley for a panel on the show for our Deadline Virtual House on June 26. Before the online panel, hundreds of fans were treated to a screening of the Daniels directed and written first episode of the Vancouver shot show.

Even though we were all in our respective homes due to COVID-19 restrictions and social distancing, the panel was live and it showed. “This is so perfect for Upload,” joked Allo (who plays Nathan’s virtual afterlife world handler Nora on the show) as Johnson (who portrays Aleesha, the handler of the Bigley played Luke) froze due to a technical glitch – a glitch that the Last Comic Standing semi-finalist nailed in her comeback.

So plug in with Upload and click on the video above – it’s the real thing.