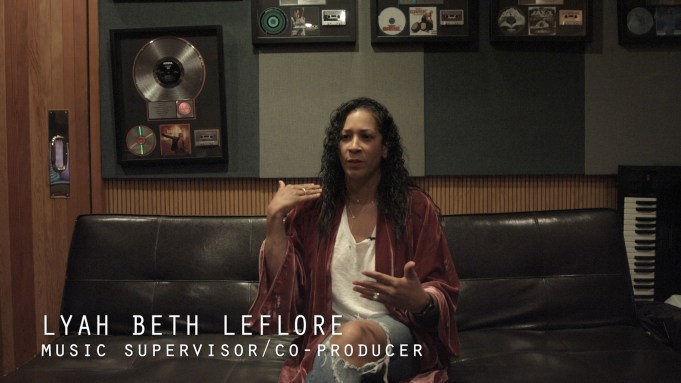 From her beginnings as an assistant at Nickelodeon to her work as a development executive, television producer and bestselling author, Lyah Beth LeFlore has worn many hats in a varied and unusual career. “That’s kind of my trademark, I think, as a creative entity,” LeFlore said sitting down for Deadline’s Production Value video series.

A creative force to be reckoned with, LeFlore’s multifaceted career has been based in an enduring “love and passion” for music. “Every day as I walk along, I literally hear music,” she said of a language she speaks fluently. “Not to sound strange, but I hear music, and I feel music.”

With USA’s Unsolved, a true-crime series investigating the murders of two iconic rappers—Tupac Shakur and Biggie Smalls—LeFlore was able to bring multiple talents to the table as co-producer and music supervisor.

In part, the project was a way for LeFlore to pay tribute to artists from her past. For someone who witnessed Tupac and Biggie’s friendship firsthand while coming up in New York, the project couldn’t have been more personal or apropos.

To provide a compelling sonic backdrop for Unsolved—which moves between the ’90s and the mid-‘2000s—the music supervisor immersed herself in music she knew well, bringing viewers into hip-hop’s Golden Age. Centering on two fallen superstars, the series proved challenging from the get-go when it came to music clearances. Hitting roadblocks with the estates of Shakur and Smalls, LeFlore got creative, building a soundtrack around other hitmakers of the icons’ generation.

The period-authentic playlist ultimately included contributions from artists and producers including Easy Mo Bee, Battlecat and Mike City. Director and executive producer Anthony Hemingway even managed to bring Tupac’s stepbrother, Mopreme Shakur into the fold, from which point LeFlore was able to work closely with the artist, licensing some of the incredible unreleased music from his vault, paying homage to the relationship Mopreme had with Tupac.

“I wanted to create a new way of going out and licensing music, and that was getting beats from noted producers, using that along with needle drops from all different genres,” LeFlore said, sitting down with Deadline at Mike City’s Unsung Studio. “It was working with a business mind, as well as a creative mind.”