Continue to Deadline SKIP AD
You will be redirected back to your article in seconds
Skip to main content
June 30, 2020 12:59pm 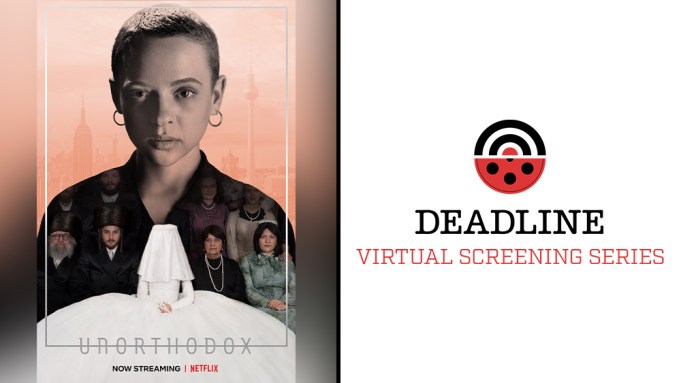 In the four-part limited series Unorthodox, show creator Anna Winger tells a story about a young woman from a Hasidic community in Brooklyn named Esty (Shira Haas), who leaves her arranged marriage and travels to Berlin, not to escape, but to find out who she really is. The series, which debuted in March, is inspired by Deborah Feldman’s bestselling memoir and tells a very specific story. During a Q&A after a screening of the first episode at the Deadline Virtual House, Winger said that it has had a significant impact across the globe.

“One thing that has been incredible is how people in so many parts of the world have responded to the show,” said Winger. “In particular, people in parts of the world we haven’t expected.” She adds that the show has crossed over barriers of faith and culture in places as far as Saudia Arabia, India and Latin America. “We never imagined we can connect in that way.”

Speaking to the impact of the show, Schrader said “We considered ourselves this small German show…I was completely overwhelmed by all the reactions.” Even though the director isn’t on social media, Haas told her that she was getting thousands of messages a day praising the show.

“A lot of my conversations with Maria was me convincing her that [the reactions] were true!” said Haas. “I had to give her proof!” She added that if she could read all the messages she could, but it would take all day. “I see a lot of them and I am very grateful.”

Winger, Haas and Scharder spoke about merging Feldman’s story and TV storytelling to bring an authentic nuance and respect to the Hasidic culture. This was also apparent in the music, production design and costume design.

“Nothing has ever been done specifically on the Satmar community before we did so I had to be really vigilant about being respectful between the dress codes,” said Seymour. From there, grew character development and a  collaboration with the entire Unorthodox team.

Unorthodox was adapted by Winger and Alexa Karolinski. The series, which is shot in Yiddish and English, also stars Jeff Wilbusch and Amit Rahav. It is produced by Henning Kamm at REAL FILM Berlin and marks the first project produced by Winger’s Studio Airlift.

Watch both panels in the video above.