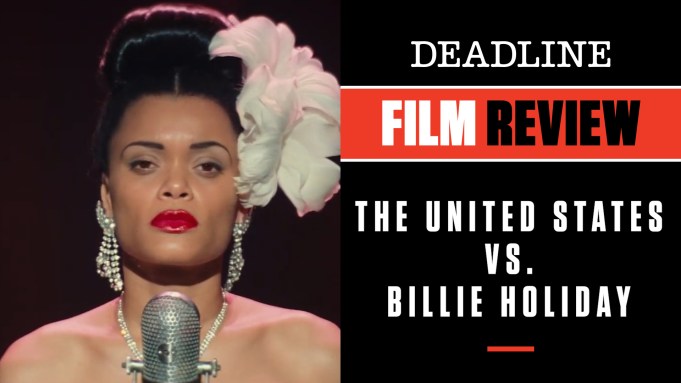 Lee Daniels says the 1972 Billie Holiday biopic Lady Sings the Blues, for which Diana Ross earned an Oscar nomination, was the beginning of his desire for a film career. The filmmaker says he’d never seen Black people portrayed in that manner before, and it affected him deeply.

Still when Pulitzer Prize winner Suzan-Lori Park’s screenplay adaptation of a specific chapter in the book Chasing the Scream from Holiday’s life, something largely glossed over in the earlier film, came along, he felt it was a Billie Holiday movie that had not been made, and became determined to do it. Casting singer Andra Day, an acting novice, in the title of role of The United States vs. Billie Holiday became the key, and thus this fascinating true drama sets the record straight in a story in which the U.S. government, through the Federal Bureau of Narcotics (now the DEA), harassed and targeted Holiday, trying to nail her for drug addiction in order to stop her from performing her signature but controversial song called “Strange Fruit.”

Daniels, who was Oscar nominated for Precious and has made his mark on several films and TV projects including the hit Empire, doesn’t always take the easy and obvious path in his filmmaking, and that is what makes it so unpredictable and exciting to witness. Here he presents a no-holds-barred story of a successful blues singer, aka Lady Day, unfortunately with a severe addiction to drugs and bad men. She also became an early champion in the Civil Rights movement when she refused to stop singing “Strange Fruit,” a song about the persecution of young Black men, inspired by horrific things she saw while touring the South.

In an attempt to thwart Holiday and stop her from performing it, the FBI and particularly Harry Anslinger (Garrett Hedlund), head of the Federal Bureau of Narcotics and self-styled perpetrator of the “War on Drugs,” go after her in a big way by using her history of drug use to do it. Anslinger sends in a Black agent, Jimmy Fletcher (Trevante Rhodes), to go undercover and nail her, but things get very complicated when instead they have a torrid affair and he becomes very conflicted in his initial mission. Working in the horrendous pursuit of other personalities of the day via the McCarthy hearings, etc., Daniels and Parks weave a web around a largely untold, and tragic, part of Holiday’s life — one from which she never really recovered before her untimely death at too young an age.

‘The United States Vs. Billie Holiday’ Director Lee Daniels On Why He “Had To Tell The Story” – Contenders Film

You simply cannot say enough about what Day achieves in this role, particularly being a first-time actor. She gets beneath the skin of Holiday, giving a raw and honest portrait of an artist under duress but determined in her belief that she can use that art and talent to make the world a more just place. She is flawed to be sure, sadly addicted, but inspiring in her quest. Day, who isn’t acting in the shadow of the memories of Ross, carves out her own interpretation and makes it fresh and right for this moment. She also triumphs musically in every one of Holiday’s well-known hits but sells “Strange Fruit” like it is the first time it has ever been sung. Extraordinary.

Rhodes (Moonlight) also is excellent as Fletcher, a man full of complexity himself and caught up in a relationship he simply can’t escape. Hedlund is appropriately unlikable as the government honcho out to make a name by using a name to do it, and Rob Morgan, Da’Vine Joy Randolph, Tyler James Williams and a wacky turn from Leslie Jordan all triumph in support. Evan Ross, son of Diana, even turns up as an agent, Sam Williams, in an interesting bit of casting on the part of Daniels (he was in Daniels’ TV series Star), and there’s also a nice bit from Natasha Lyonnne as Tallulah Bankhead.

Producers are Joran Fudge, Jeff Kirschenbaum, Joe Roth, Tucker Tooley and Pamela Oas Williams. Hulu begins streaming it on February 26. Check out my video review with scenes from the film at the link above.

Do you plan to see The United States Vs. Billie Holiday? Let us know what you think.