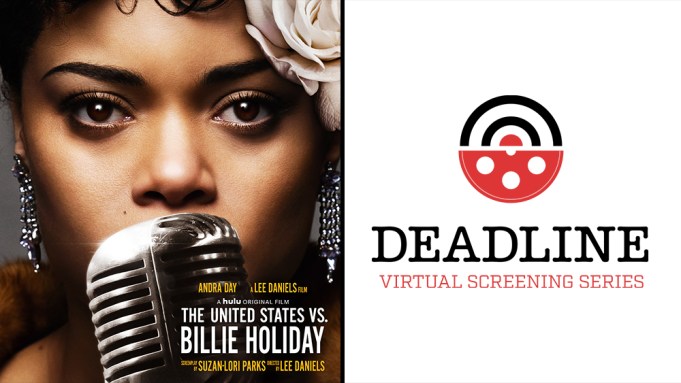 Andra Day, star of The United States vs Billie Holiday, was the surprise winner Sunday in the tightly fought Golden Globes race for Best Actress in a Drama. The win further ratcheted up her chances to land a Best Actress Oscar nomination for the Lee Daniels-directed film, which examines the FBI and Federal Department of Narcotics’ relentless campaign to target blues singer Holiday for her controversial performances of her signature song “Strange Fruit,” a lyric inspired by her experiences witnessing lynched Black men hanging from trees in the South.

Daniels, Day and co-stars Da’Vine Joy Randolph, Evan Ross and Tyler James Williams joined me in conversation recently for our Deadline Virtual Screening Series. Daniels explained why he felt it was urgent to bring this aspect of Holiday’s life, little known before, to the screen at this time. He also had been inspired by the 1972 Diana Ross Holiday biopic Lady Sings the Blues but felt there was much more to the story of her life with this particular episode.

“I wanted to direct because of that film. Forty years later [I still thought] that was the story and that was a good story, but it wasn’t really the honest story of what it was that Billie went through with the government,” he said. “So, when Suzan Lori Parks came to me with this script, it was revelatory. I was 58, or 59, and had not really understood the magnitude of ‘Strange Fruit’ — those lyrics, those sentences. It like ,hit me. It was visceral. There was no way that I was not going to tell this story. It’s still happening today. So, I think that’s the way the government works, and they haven’t changed. So, I thought it was really relevant to tell her story.”

As for coming together with his now newly minted Golden Globe winner Day,  Daniels said he initially didn’t want to meet with the singer since she had never acted before and so much of this film would require the lead star to carry it. “And then I met with her, and she was enchanting, and she didn’t really want to do it herself. I found myself talking her into auditioning after, you know, I walked into the room not really wanting her. She’s a perfectionist, and she really wanted to do Billie Holiday right, and I knew that I want to work with someone that’s a perfectionist, and I consider myself a perfectionist. So, I really wanted to take a journey with her. So, she auditioned, and the rest is history. She’s incredible,” he said.

Day, reluctant indeed to take on the role, finally knew she had to do it. “I told [Daniels] the next day, I was like, are you sure you looked at everybody? Like, are you sure that this is a good idea because I just, I don’t know. I was convinced. I feel like I was terrified. I tried to make it go away because I was scared, and I didn’t want to be bad,” she said.

“I just kept playing in my head over and over again. I was thinking I’m going to be that stain. You know what I mean? Once we got over it…it was a mutual fear we shared. So was prayer. I was doing a devotion, and I read a scripture about walking on water and about being caused to do an act of great faith, and to face your fear instead of asking for the storm to go away. You got to walk through it because that’s where the change, where revelation is,” she said. “Then upon reading the script I saw in more parts this wasn’t a retelling of Lady Sings the Blues, the movie that I love so much. It was like, first of all, ‘Hell no. I’m not going to approach trying to remake that movie.’ But as a Billie Holiday fan as well I was seeing, oh, they’re going to talk about, you know, the SBN, and Harry J Anslinger, and the FBI, and the Federal Bureau of Narcotics going after her under this guise of a war on drugs. She was truly the great godmother of civil rights. So, it was a few incentive arguing pieces, and then working with Lee. So, we just kind of linked arms and trusted each other and dove in together.”

Randolph and Ross, the son of Diana Ross, also talked about how they approached their roles (Williams, unfortunately, found his Zoom connection iffy and never got to speak), and what it meant working with Daniels and Day on this film. Daniels actually had nothing but praise for the entire large ensemble he put together to make this film.

“I’ve got to tell you, this group of actors I’ve worked with, I don’t know, I’m spoiled now, and you know, you’ve lived my career, and I’ve worked with some beasts,” he laughed. “This right here, these kids, they gave me my life. They gave me my life because it was almost like they had something to prove. You know, they wanted to help Billie. They were in service to Billie. They were selfless. I get emotional talking about them. I’ve fallen in love with them. It’s incredible. “

To watch a portion of our conversation check out the video above.