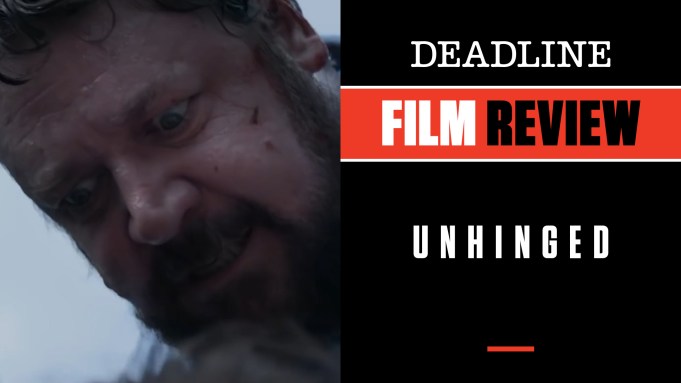 Russell Crowe is Unhinged! That line pretty much sells this entire 91-minute thriller and also pretty much sums up the depth of what is on view beyond mind-numbing violence committed by a driver whose grievances against the way the world has treated him manifest into all-out road rage against a mother taking her son to school.

As the debut offering of the new distribution company, Solstice, the film has received outsized publicity over the fact that the distrib has made it clear that it was determined to become the first wide-release theatrical film out after the pandemic forced shutdown of movie theaters. In the interim, there have been several date changes as Unhinged has had to play a game of cat-and-mouse with Warner’s release plans for Chris Nolan’s Tenet, the movie everyone needs to have out of the way if they want to get any attention. Finally it was put up or shut up, and the U.S. domestic release of Unhinged begins Friday – not on VOD or streaming services, but in theaters — whichever theaters Solstice can muster. And that includes California and New York, where most, other than drive-ins, remain closed for the foreseeable future. As of Wednesday there were 10 drive-ins booked for the film in California, but it appears that the middle of the country, where this film might play best, will have a much wider break before Tenet gets rolling for Labor Day weekend.

In a way, this simplistic story is perfect for the times. Rachel (Caren Pistorius) is driving her son Kyle (Gabriel Bateman in a role that merely requires him to look concerned while strapped in the back seat) to school and stuck in massive traffic jams. At a stoplight she encounters a van that simply doesn’t move when the signal turns green. She misses the light, yells at that driver, and continues on her way. Unfortunately, she picked the wrong guy to honk her horn at. In no time, that guy — known in the credits only as “The Man” (Crowe) — begins a slow-burning vehicle-to-vehicle relationship in which he demands an apology she won’t give. Game on. For the rest of the running time, the stakes ratchet up severely as he promises to give her a day she will regret.

That begins in earnest after dropping Kyle off at school and only increases when she stops for gas — only to notice soon after going inside the convenience store to pay that the Man is right there behind her car. To keep this thing going, screenwriter Carl Ellsworth and director Derrick Borte use the opportunity to let us discover that somehow the Man has taken possession of her phone that was left in the car. He threatens to go through her contacts list and do in those nearest and dearest.

And the Man lives up to his promise, first turning up instead of her for a coffee-shop meeting with her longtime pal and divorce lawyer Andy (Jimmi Simpson) and later at her brother Fred’s (Austin P. McKenzie) for another teachable moment she won’t forget. Let the blood flow as the Man increasingly becomes uncontrollably enraged. Where are the police in all of this, especially since one murder is done in plain sight of several iPhones? They always seem to be just unable to catch up, of course a convenient device for these kinds of films that allows the seemingly ill-matched heroine to take on the twice-as-strong bad guy on her own. Recent cinematic example: Halle Berry in Kidnap.

Basically, that is all there is to Unhinged, an excuse to serve up brutal moments of extreme violence and torture all because a Trump-era aggrieved white man is ignored. Crowe throws off a couple of lines in this regard meant to explain why he has become the way he has become, but it is an almost-laughable attempt to give this some gravitas beyond existing as a kind of B-movie thriller with an A-list star at the wheel. That said, Borte effectively makes it work on a visceral level for those with the stomach for this sort of thing, and it never slows down for an instant; so, since it is back to theaters with this one, you likely will be on the edge of your seat for the duration. Crowe actually manages some nicely nuanced moments here, knowing how to give this unnamed monster a little edge and even playful demeanor when called for. Pistorius is properly terrorized and then weaponized, playing the action scenes with intense expression. We’ve seen it all before, but it is fun as far it goes. You’ll probably hate yourself in the morning for enjoying the thing, though.

Falling Down and the early-Spielberg Duel appear to be faint echoes of inspiration here, but it doesn’t come close to those superior examples in this genre. This clearly is meant to be pure popcorn entertainment, unfortunately being released at a time when it seems it might be just as terrifying to eat popcorn while seeing it. Oh well. Producers are Mark Gill, Lisa Ellzey and Andrew Gunn. It hits U.S. theatres on Friday after first opening in the UK and Canada, among other locales. If it lures customers back into the moviegoing experience, Unhinged will have earned its place in motion picture history, and that would be fine with me. Ironically, it is the perfect drive-in flick, but just be sure to stay socially distanced in your cars for this one, folks.

Check out my video review with scenes from the film at the link above. Do you plan to see Unhinged? Let us know what you think.