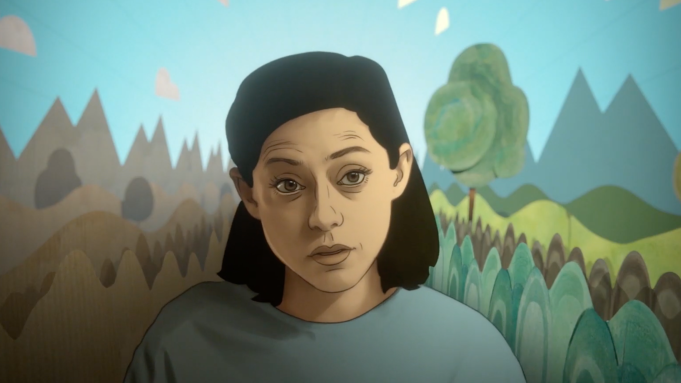 Amazon dropped a teaser trailer today for Undone, an animated series that aims for a mind-bending brand of adult sci-fi that ventures into a trippy head space that evokes the surreal pursuits of Philip K. Dick, Phillip Pullman, Inception, The Matrix, and Pink Floyd.

Undone will premiere later this year on Amazon Prime Video but the first two episodes of the Amazon Original series will get a big-screen audience this Saturday at the ATX TV Festival in Austin, Texas.

The series is the work of Kate Purdy & Raphael Bob-Waksberg (BoJack Horseman) and it follows the cosmic journey of a young woman who treks across time, space, and beyond to solve the mystery of her father’s death.

The synopsis: “Alma Winograd-Diaz (Rosa Salazar of Alita: Battle Angel) takes her mundane life one day at a time until a near fatal accident induces visions of her late-father, Jacob. Through these persistent visions he urges her to tap into a mysterious ability that allows her to travel through space and time with the hopes of preventing his untimely death. This quest challenges Alma’s relationships and brings into question her mental wellbeing with those closest to her.”

Undone is the first episodic television project to use  rotoscoping animation, which has visual rhythms that are far removed from the mainstream CG aesthetic that dominates and largely defines contemporary Hollywood’s approach to animation. The best-know product of the rotoscoping approach to date is A Scanner Darkly, the 2006 film based on the writings of Philip K. Dick.

Amsterdam-based animation studio Submarine brought a team of painters and artists from across Europe to to bring multi-media elements to the screen visuals, among them vivid backgrounds achieved by oil paintings on canvas.

The meticulous tasks were done under the direction of Hisko Hulsing (Montage of Heck) with rotoscope by the veteran team behind A Scanner Darkly : Austin-based Minnow Mountain (Tower) led by co-producer Craig Staggs.

Undone joins the most unlikely Hollywood storytelling trend of recent seasons: inter-dimensional travel with all of its knotty concepts and existential head scratching. Breaking down the barriers between multiple realities and planes of existence is all the rage these days with Avengers: Endgame and last year’s Oscar-winning Spider-Man: Into the Spider-Verse as well as upcoming projects like Spider-Man: Far From Home and HBO’s His Dark Materials.