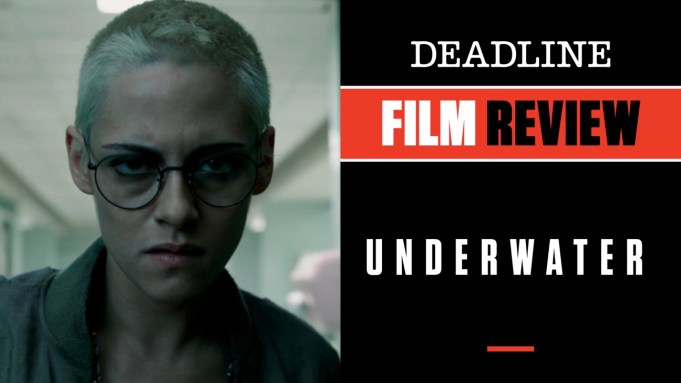 The plot, or any semblance of one, is what is really underwater in this shameful zillionth ripoff of Alien, the clear template for this kind of sci-fi horror movie.

Underwater is another remnant of the 20th Century Fox slate that Disney is stuck releasing. Fox was the expert studio in making and distributing this genre of film, but clearly its heart wasn’t in this one — which, aside from the now-usual expert computer-generated special effects work, would barely pass muster as a ’50s-style monster movie. Director William Eubank and writers Brian Duffield (who also has story credit) and Adam Cozad are out of their leagues here, by about 20,000 of them. Ah yes, it’s January, isn’t it?

There appears to be not even an attempt at character development, and poor star Kristen Stewart is forced to run around scantily clad in enough of the movie to immediately make us suspend disbelief that she is a serious science researcher, part of an exploration group in an undersea station that serves as their lab. It takes little time to rock her and her colleagues to the core when a massive rumbling and explosion occurs, virtually destroying their operation. “Was that an earthquake?” asks startled co-worker (Mamoudou Athie). Could be, but there might be other factors at play, eh?

Anyone remotely invested in this genre will know there is an unseen monster come-a-calling, and they also will know that this group is about to get eaten one by one. My favorite scene by far is when Stewart does get consumed by the toothy creature but still manages to break out alive. Fun stuff.  But I digress.

The basic premise has the Captain (Vincent Cassel) coming up with a plan for the group to stride the ocean floor in an attempt to get to their Drill Station, where in theory they can then find their way out of this murky morass. Or something like that. This might be the most inconsequential role this fine French star ever has played.

In typical fashion the monsters lurking in the dark waters are only glimpsed in bits and pieces until the big reveal. As these guys go, this one is pretty much by the numbers, not nearly as frightening as the one Ripley had her showdown with in Aliens. Perhaps monsters in deep space are scarier than their cousins in the deep sea. In addition to Stewart, Athie, and Cassel, the crew also consists — for a while, at least — of T.J. Miller, John Gallagher Jr., Jessica Henwick, and Gunner Wright, but they probably all wish I hadn’t mentioned their names.

This actually is the kind of movie you hope would have cheesy effects and D-level production values — at least then it might have a shot of being fun in a bad-movie kind of way. But Underwater has an A team behind the scenes, so instead of camp it is just plain boring, even at 90 minutes before end credits start to roll.

Producers are Peter Chernin, Jenno Topping and Tonia Davis, a low-water mark for this prolific team. Disney opens the 20th Century Fox film from Chernin Entertainment and TSG Entertainment with previews starting tonight. Check out my video review with scenes from the film by clicking the link above.

Do you plan to see Underwater? Let us know what you think.