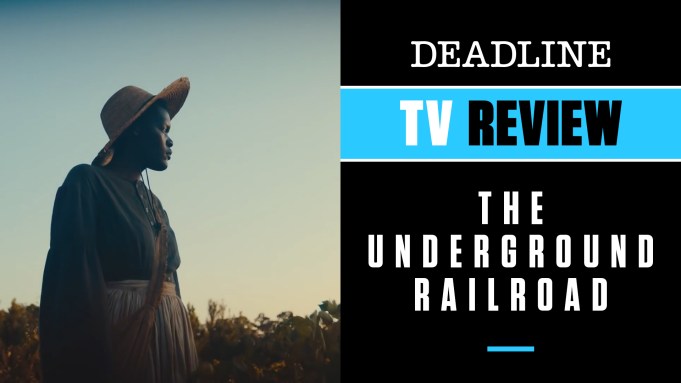 Debuting on Friday on Amazon Prime Video, The Underground Railroad is the show you have to watch this weekend, this week, and over the weeks and months to come.

As a cursory glance at some of the brutal truths of American history tells all of us, there is a lot to take in from Barry Jenkins’ brilliant adaptation of Colson Whitehead’s Pulitzer Prize-winning historical fiction novel of the same name. In the somethings unearthly and sometimes rapine overflowing Underground Railroad, there is a lot to learn and a lot to understand and perhaps even confront, as I say above in my video review of the 10-episode series.

Starring Thuso Mbedu, Aaron Pierre, Joel Edgerton and Chase W Dillon, I have no doubt there will nominations and hardware galore for the wonderous visual and audio mural from showrunner Jenkins, cinematographer James Laxton, production designer Mark Friedberg, costume designer Caroline Eslein and others. In a manner that few works on the small screen achieve, Underground Railroad will also stand the test of time from this moment in time.

That is especially true in this time, when there is a renewed battlefront in the culture wars over America’s real past and the stories it tells to and of itself, the brutal and beautiful soul of our nation that Underground Railroad depicts hits all the harder – so much that many will want to look away.

Whether or not you want to own up to the exactitude of the likes of the groundbreaking 1619 Project and the legacy of human bondage and white supremacy, there can be no denying that much of the construction of American society was horribly conducted on the whipped and burnt backs of the enslaved.

Barry Jenkins looks at that truth directly, to our benefit.

Entirely directed by the Oscar winner, Underground Railroad weaves together real and alternative history and in its station to station journey towards freedom. It vividly captures the actual and metaphorical violence that has long permeated our society from the root to the fruit.

Watch my full review in the video above, and watch The Underground Railroad. You must.