Continue to Deadline SKIP AD
You will be redirected back to your article in seconds
Skip to main content
December 11, 2019 5:48pm 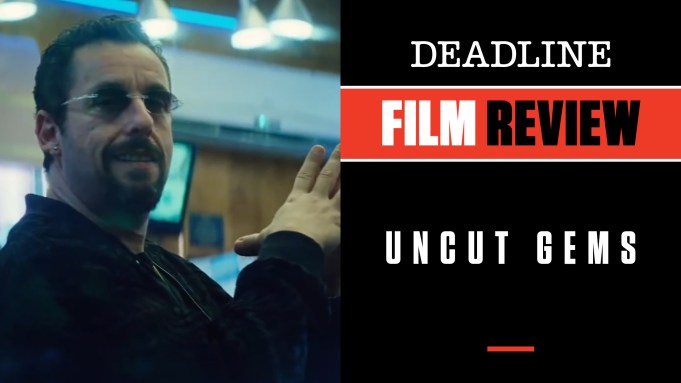 Adam Sandler has made a boatload of comedies that don’t really challenge him as an actor, but after seeing his remarkably audacious and riveting turn as a New York diamond district merchant and compulsive sports bettor, you will know he is an extraordinary performer in ways you can’t imagine. Wait until you get a load of what he does as Howard Ratner in Josh and Benny Safdie’s Uncut Gems.

At nearly two and a half hours, Sandler almost never is off screen, giving a performance that, in terms of toxic intensity, starts at a 10 and goes up from there, never once coming up for air. It is as dizzyingly great a piece of acting as I have seen all year, one that will exhaust you and exhilarate you.

The same came be said for the Safdie brothers’ movie, which feels akin to their equally abrasive and insanely paced Good Time, which also featured a performance from its star (Robert Pattinson) that knocked you off your seat. So take Good Time and ratchet it up a bit, throw in a sound mix with overlapping dialogue right out of Altman, set your star loose, and what you have is the brew of this highly original and compelling piece of cinema. It is probably not for everyone, but tune into its delirious rhythms and you will not be able to resist. It also happens to be a quintessential and gorgeous paean to the city itself.

What can you say about a movie that opens like some weird epic set in Ethiopia among diamond cutters in that country? Soon we are following the ultimate opal diamond on its surreal, Felliniesque journey with dazzling visuals as it twists and turns its way across the planet — finally landing inside, wait for it, Howard Ratner’s bowels as he is in the midst of a colonoscopy. How is that for an beginning? It only gets better, if not weirder, from there as we take a dive into Ratner’s world as a crafty diamond dealer who is his own worst enemy, blowing whatever money he makes on wildly indulgent but confident sports betting.

This time, though, this new-age Willy Loman knows he has got the goods on its way, that diamond, and he thinks it has to be worth at least a million. Soon enough he has basketball superstar Kevin Garnett (playing himself in fine deadpan style) interested in it, even letting him take it out for a spin. All the while Ratner, per usual, is being pursued by creditors and those he owes a ton of money for his past indiscretions. He also has a wife (Idina Menzel) who hates him and a side dish named Julia (the excellent newcomer Julia Fox) who he keeps in a spare apartment in town. There are excursions there, as well as family dinners, but the thrust of all this takes place in his store, where it all threatens to come crashing down on him.

Josh and Benny Safdie and co-writer/editor Ronald Bronstein have cooked up a corker of a film, and an all-timer of a role for Sandler, who has been great in the past in stuff like Punch Drunk Love and The Meyerowitz Stories but never this great before. And considering its length, they keep you right on the edge for the entire time in such a way that I was astonished that any film could keep up such a relentless and demanding pace.

The cast is first-rate down the line and also includes LaKeith Stanfield as a guy who brings in well-heeled potential customers to Howard, along with Eric Bogosian and a lot of non-pros who are the real deal straight out of the fictional Howard’s world. They certainly lend authenticity to a movie so atmospheric in its place and time that you can just smell it. This project took about a decade for the Safdies to realize it finally onscreen. It was well worth the wait.

Producers are Scott Rudin, Sebastian Bear-McClard, Oscar Boyston and Eli Bush. A24 opens it Friday. Check out my video review with scenes from the film by clicking the link above.

Do you plan to see Uncut Gems? Let us know what you think.

How The Safdie Brothers &amp; Scribe Ronald Bronstein Took A Decade To Carve Out ‘Uncut Gems’ – The Contenders NY