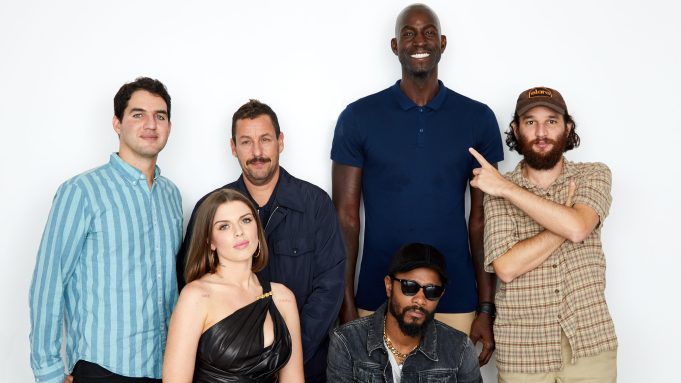 The Safdie brothers—Josh and Benny—arrived at TIFF with one of the most anticipated films of the festival season, having bypassed Cannes (where their last film, Good Time, premiered) and Venice. Starring Adam Sandler as New York jeweler Howard Ratner, and set in 2012, it plays like a feelgood version of Abel Ferrara’s Bad Lieutenant, with the added appeal of basketball player Kevin Garnett and Canadian R&B artist The Weeknd as themselves.

“The film is about a jeweler on 47th street who has gotten an opal from Africa into his jewelry business,” Josh explained when the pair stopped by the Deadline studio, along with their main cast. “He’s kind of posited all of his hope and dreams into this one thing, and he’s going to spin [things] around.”

It transpired that the story, though fictional, was somewhat based on personal experience. “Our dad used to work in the diamond district,” said Benny, “and we learned about all the people and the crazy stories that existed only on that block. From there, it just took a long time; it’s been 10 years at this point. We were working on it, and then Ronnie Bronstein, who we write with, got involved, and it was like a living document throughout all this time.”

Though the film gives Sandler top billing, the actor is given a run for his money by Garnett, now retired, who plays himself as a hopeless optimist who feels a strange connection with Ratner’s African opal. “I told them that if I couldn’t play myself, I didn’t think that I could be in this movie,” laughed Garnett. “But I think I have the easiest job, out of everybody here. There was great direction on the set, and there was a great energy. It was really easy to be myself.”

See more of this interview by clicking on the link.