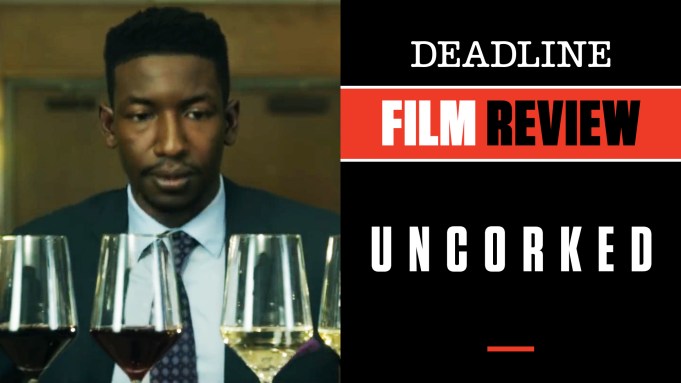 Writer-director Prentice Penny pops open a modest but enormously engaging story about a young African-American employee in a wine store who wants nothing more out of life than to become a master sommelier. Since there are only 230 of them in the entire world that is quite an uphill climb, but the imposing numbers don’t stop him in his quest — and neither can his more traditional father, who instead has been grooming him to take over the family BBQ restaurant business.

That is the central plot and conflict in Uncorked, a winning tale of dreams and what it takes to follow them. Elijah (Mamoudou Athie) is a smart guy who somehow got a love of wine, and all the intricacies involved in assessing it, in his system and can’t get it out. Working at a wine store, he loves regaling customers with his knowledge of the vino, They include Tanya (Sasha Compere), with whom he strikes up a romantic relationship after she seems charmed by his ambition.

However, when he reveals his dream of becoming a master sommelier at a family dinner, his father Louis (Courtney B. Vance) is not impressed and actually angry that his son would turn his back on following in the footsteps of not only him but also his father, who founded the family-run BBQ place in 1960. His mother Sylvia (Niecy Nash) is much more supportive, warmly encouraging her son to do what makes him happy and refereeing the split with dad. Nevertheless, Elijah jumps in with both feet, signing up for classes and taking an exam that is legendarily impossible to pass the first time.

While in school he meets other students, all white, trying to do the same thing and finds a way to study with them overseas in Paris once he finds the money to join them. Meanwhile, his father shows him a planned second restaurant, even trying to placate his son by throwing in a bar where he can do his “wine stuff.” Complications arise not only with Louis but also Tanya, and the serious recurrence of cancer for Sylvia just as her son is studying overseas and chasing his big dreams.

Penny crafts a sweet, human story that doesn’t trade on stereotypes of young black men but focuses instead on one who wants the chance just to go his own way, no matter what obstacles family or society put in his way. Athie, so good in films like The Front Runner, never is less than believable in convincing, understated fashion. He’s an impressive actor who is so natural you can’t catch him acting, no easy task. Vance might have his best role ever as the determined father who wants his son to follow family tradition rather than some wild goose chase, as he sees it. Nash is lovely in a role that doesn’t require her to be anything more than a parent who wants the best for her son, and dealing compassionately with a husband who can be a little cranky. Compere also is perfectly cast in an ensemble of fine actors who make these characters you will enjoy spending a little time with. This film is a small but sparkling little gem.

Jill Ahrens, Ryan Ahrens, Jason Michael Berman, Chris Pollack, Ben Renzo, Datari Turner and Penny are the producers. Check out my video review with scenes from the film at the link above. The film began streaming on Netflix this week.

Do you plan to see Uncorked? Let us know what you think.