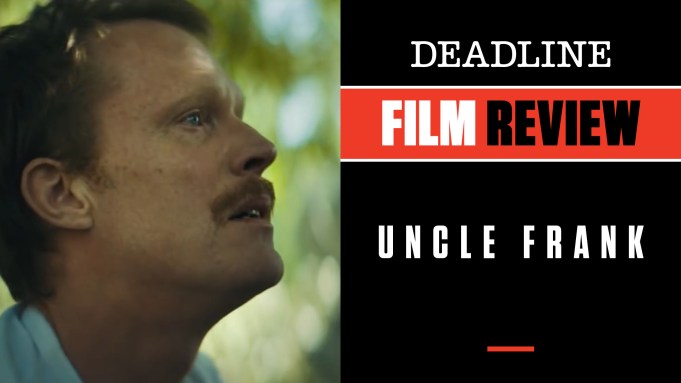 Alan Ball won an Oscar for his original screenplay of American Beauty, which also took the Best Picture award for 1999. Later he made his directing debut with Towelhead in 2007, but it has taken 13 years before making his second directorial effort. With Uncle Frank, he has revisited his own Southern roots to explore the story of a gay man nearly destroyed by the ongoing trauma of his younger years after he is forced to confront it all over again when he returns for the funeral of his father. Ball, in between those two films, has been busy as the mastermind behind two hit series, Six Feet Under and True Blood. But this very human, small character study has been percolating within him for a long time and it delivers a deep impact for those willing to embrace the familiar familial plight of Frank Bledsoe, beautifully acted by Paul Bettany in one of his finest screen turns.

A Sundance debut this year, Amazon picked it up and is packaging it as a television film rather than a theatrical-style movie, but whatever it is called, this superbly acted independent film packs an emotional wallop. If at times it all seems too melodramatic, it really isn’t. The Southern characters depicted here could seem stereotypical to some, but they feel very real, and the tendency to go over the top in storyline and portrayals thankfully is resisted at every turn by both Ball and his well-chosen cast.

In part a road-trip movie, at least for its first half, the story centers on Beth Bledsoe (a fine Sophia Lillis), the niece of Frank, who is a professor of literature at the East Coast college to which she has been accepted. He lives with his significant other, Wally (a terrific Peter Macdissi), and seems to be in a very healthy relationship — one Beth easily accepts even though she has traveled from the same close-minded Southern town in which Frank grew up. When word comes that his father, Daddy Mac (Stephen Root), has died, Frank makes the decision to go to the funeral with Beth but without Wally — much to the latter’s consternation. No sooner do the pair hit the road down south than they find they are being followed by none other than Wally, who is determined to offer his support but will stay out of sight of Frank’s relatives.

The visit brings up past traumas for Frank, and flashbacks reveal his initial attraction to other males and the rocky, unaccepting attitudes toward him by Daddy Mac. A devastating reading-of-the-will scene becomes emotionally catastrophic for Frank, a real gut punch but played with quiet dignity by Bettany, the camera catching all you need to know by just focusing on his face. From that point, the story gets a lot heavier and reflects the problems a person can face about their sexuality, particularly with rigid Southern family attitudes baked in. For Frank, his success in his current life and career is not enough to overcome the shame placed on him from this insular world, and a third-act reveal takes things down even further.

Fortunately, in this case Ball does not want to turn it all into a complete downer, and along the way to its resolution there are some very moving scenes, including a beautiful come-to-mama moment between Frank and his Mammaw, played with her usual grace and authenticity by the great Margo Martindale. Equally fine is Root, who manages to invest the unlikable Daddy Mac with some dimension beyond just his lack of empathy for his son. It is a tribute to the actor that his character maintains a real presence even after he is physically out of the picture. Shout-outs as well to an all-pro supporting cast playing family members including Lois Smith as Aunt Butch, Judy Greer as Kitty and Steve Zahn as Mike Bledsoe.

Producers are Bill Block, Michael Costigan, Jay Van Hoy, Stephanie Meurer, Ball,  and Macdissi. Amazon begins streaming it on November 25 — perfect if you are celebrating Thanksgiving with your own dysfunctional family. Check out my video review with scenes from the film at the link above.

Do you plan to see Uncle Frank? Let us know what you think.