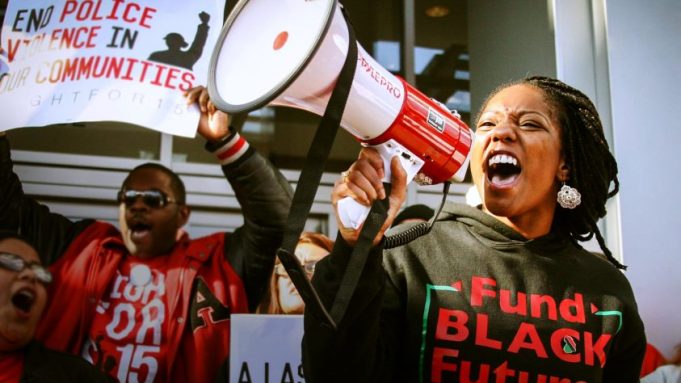 EXCLUSIVE: In the struggle for racial justice in Chicago and across the country, a new generation of Black feminist leaders is emerging.

Two of these leaders—Janaé Bonsu and Bella BAHHS—are at the heart of Unapologetic, an award-winning documentary set to open at the Gene Siskel Film Center in Chicago on August 20, in New York August 27 and in Los Angeles September 3, with a nationwide release to follow at in-person and virtual theaters. The film, directed by Ashley O’Shay, follows Bonsu and BAHHS as they and fellow activists “challenge a Chicago administration complicit in state violence against its Black residents.”

Bonsu and BAHHS were spurred to action after the police killings in Chicago of two young African Americans: Laquan McDonald in 2014 and Rekia Boyd in 2012. McDonald, 17, was shot 16 times by officers who claimed they acted in self-defense, but their account was later contradicted by dash cam video released over a year after the shooting. Boyd, 22, was killed by an off-duty police detective; a judge issued a rare “directed verdict” acquitting the detective of involuntary manslaughter, suggesting instead that he should have been charged with first degree murder.

The deaths of McDonald and Boyd would serve as the prequel to more police killings of African Americans: of Tamir Rice in Cleveland, Breonna Taylor in Louisville, Kentucky, Bettie Jones in Chicago, and George Floyd in Minneapolis, among many others.

“After a historical summer of Black uprising last year, we are elated to share [Unapologetic] with a theatrical release,” O’Shay said. “This Chicago story resonates with communities throughout the world, as more and more citizens organize for Black liberation. We must continue to uplift Black feminist leaders like Janaé and Bella, and we look forward to engaging with the people, organizations and partners through our screenings, talkbacks, and panels.”

Unapologetic marks O’Shay’s feature directorial debut. The documentary, produced in collaboration with Kartemquin Films, held its world premiere last August at the BlackStar Film Festival. It also screened at Frameline, Outfest, and DOC NYC, and was shortlisted by the International Documentary Association for Best Documentary Feature in 2020.

O’Shay recalls the origins of her documentary in 2017, when “people of all ages from neighborhoods throughout Chicago came together to organize around their frustration. With nothing but a borrowed camera and monopod in hand, I joined the hundreds descending upon Chicago Police Headquarters to demand justice. The energy was electrifying. Black women on bullhorns stood in front of crowds leading the space. For the first time, I experienced a different narrative unfolding in the enduring struggle for Black freedom — one led by Black feminist voices. I couldn’t help but see myself in them.”

Eventually, her attention was drawn to Bonsu and BAHHS in particular.

“Over the course of two and a half years,” O’Shay explained in a director’s statement, “we watch as these women grapple not only with what it means to lead a mass movement, but also to enter early adulthood as Black, queer women.”

In the exclusive clip above, Bonsu and BAHHS join a group of young Black activists disrupting brunch at a Chicago restaurant on New Year’s Day, 2016. Their demand for accountability in the death of Rekia Boyd appears to stun the crowd of mostly white diners.