Continue to Deadline SKIP AD
You will be redirected back to your article in seconds
Skip to main content
May 1, 2019 1:50pm 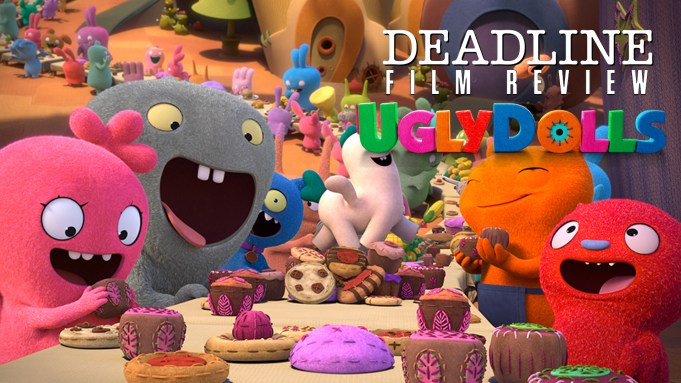 With just a few weeks to go before the fourth chapter of Disney/Pixar’s magical Toy Story hits theaters, families could do a lot worse than to spend 88 minutes with some other toy dolls who, while they don’t have exactly the same name recognition — or, let’s face it, brilliance — as in those movies, do their best which is kind of the message anyway.

UglyDolls, based on the 2001 toy line that made its way into kids’ hearts with a ragtag ensemble of unconventional and less-than-perfect dolls, is a natural for a movie adaptation, and director Kelly Asbury and his team have a found a nice way into the tale that ought to thoroughly satisfy the young-kid target audience, as well as fans of the pop stars who dominate the voice cast. In this regard the film can be compared less to Toy Story and more to Trolls, which also featured a strong pop score.

It was a wise decision to take the UglyDolls concept and plop it right into the heart of an animated musical confection. The songs are hum-able, including “Broken And Beautiful,” “All Dolled Up,” “Unbreakable” and the blissfully politically incorrect “The Ugly Truth,” the latter sung with conviction by Nick Jonas who voices the character of Lou, the blond and apparently flawless leader of the town of Perfection where every doll admitted is no less than perfect in every way (no hair out of place) as they get ready to join the corporate factory line to eventually land in some child’s bedroom.

Wanting nothing more than to be part of that other world is Moxy (Kelly Clarkson, giving it her all musically and otherwise), a pink sweetheart with image issues. She is determined to take her gang of equally unsuitable-for-Perfection friends who all reside in Uglyville, a dark foreboding village of rejects, and get over to the place Lou runs.  Included in her crowd are UglyDog (Pitbull), the Uglyville Mayor Ox (Blake Shelton), Wage (Wanda Sykes), Lucky Bat (Chinese pop star Wang Leehom) and Babo (Gabriel Iglesias). Dropping into their lives one day is Wedgehead (Emma Roberts).

This awkward crew does make their way out, but the reception from Lou and others in Perfection is less than welcoming. However, one of those so-called lovely dolls, Mandy (Janelle Monae), does see the humanity in the Uglyville arrivals and, because she hides her own imperfections, decides to befriend them.

Their plight and eventual realization that physical “perfection” is really not the goal, and that who we are inside is what really counts, is the smart message that is more important for kids to hear now than ever. UglyDolls delivers it in a sweet, beautiful way, and parents can feel safe with this one. And then there is that score! Composer Christopher Lennertz and lyricist Glenn Slater’s tunes are a cut above for this sort of thing and stand nicely on their own.

Producers are Jane Hartwell, Robert Rodriguez and Oren Aviv. STXfilms releases it Friday. Check out my video review above with scenes from the film included.

Do you plan to see UglyDolls? Let us know what you think.