Netflix's Ted Sarandos To HFPA: “We’re Stopping Any Activities With Your Organization Until More Meaningful Changes Are Made"
Read the full story
February 3, 2021 11:30am 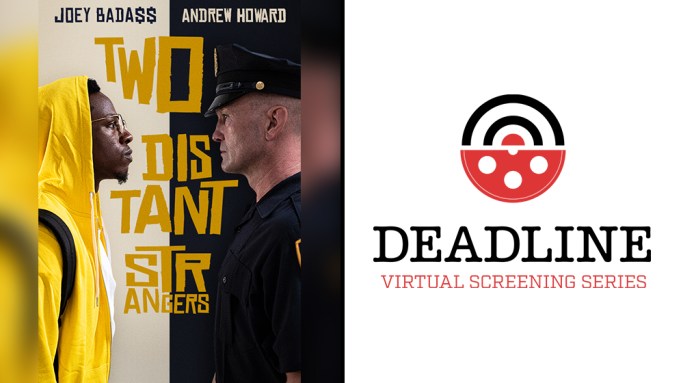 Shot last fall, amidst the Covid-19 pandemic, Two Distant Strangers embraces elements of genre storytelling to accentuate the horrors of police violence in America, and the systemic racism that continues to feed it.

Directed by Travon Free and Martin Desmond Roe, from a script by Free, the Oscar-contending, live-action short follows Carter (Joey Bada$$), a cartoonist who looks to get back home to his dog, after spending the night with a new romantic interest. As the character steps outside, he is brutally murdered by the police, for no reason at all—and subsequently, he finds himself stuck in a time loop, where he’s forced to relive this moment, over and over again.

In a recent panel discussion on the film, as part of Deadline’s Virtual Screening Series, Bada$$ joined Free, Roe and producer Lawrence Bender to discuss the process of bringing the film to life, noting the emotional toll he knew it would take on him, when he first read the script. “It was something that I really had to contemplate, because I was in such a great space, mentally,” he said, “and I was actually afraid that [in] taking on this role, I might take myself out of that place.”

Mirroring the murder of Minneapolis native George Floyd last summer, the most trying scene for Bada$$ saw Carter being strangled by police officer Merk (Andrew Howard) and his colleagues. “Going into this thing…me and Andrew had such great chemistry. It felt fun because we’re making a timeless piece of art,” he said. “But in that moment, it felt very real.”

Marking the first large-scale directorial outing of Free—an Emmy-winning writer and producer whose credits include Wilmore, Black Monday, and Full Frontal with Samantha Bee—Two Distant Strangers would not be the powerful film it is without a stellar script. “It was pretty obvious from the moment the script hit that this was Travon’s soul,” said Roe. “[And] soul [is something] that you either have or you don’t.”

At the same time, the project owes a profound debt to both Roe and Bender, who brought a breadth of filmmaking experience to bear, and helped Free to grapple with hurdles on set that he’d never before encountered. “Martin is a genius, just to put it bluntly. I could not have asked for a better teammate in making this movie,” said Free. “It was a learning curve, in terms of the rapid nature of filming. You have to make decisions very quickly because you only have one shot at it.”

A three-time Oscar nominee, Bender aided Free in his pursuit of funding for the indie short, also guiding his team through the hurdles of shooting during a pandemic. “We didn’t have insurance, and it was a bit scary,” the producer recalled. “But we just decided that we were going to do everything possible to keep everybody safe, [and] that we could [also] do more than…was required of us.”

In closing the panel, Bada$$ and his collaborators reflected on takeaways from Two Distant Strangers, sharing what is that gives them hope for change within the U.S. “When the power of love overcomes the love of power, the world will know peace. I think we just have to stay confident in knowing that there are a lot of good people out there, regardless of skin color, or culture, and things like that,” the actor said. “I believe things like this [film] inspires love, and motivates people to want to come together, and to have these conversations—and to embrace the current reality that we’re in, to ultimately be able to change that and move forward.”

From Free’s perspective, what the world needs—and what the film calls for—is compassion. “It’s asking you to look at Carter…to look at the list of names that you see at the end of the movie, and to open yourself up to understanding why…people, in very mundane situations, end up losing their lives,” he said. “It’s asking you to [consider], why is this thing happening to this one group of people in this country? What’s going on?

“[I hope] people can just walk away from this going, ‘I can be a little more compassionate toward Black people, toward Black women, toward Black men,’ understanding that what’s happening to them is not being made up,” the director added. “‘It’s a real thing, and I can play a part in changing it.’”

For more from our conversation with the artists behind Two Distant Strangers, click on the video above.