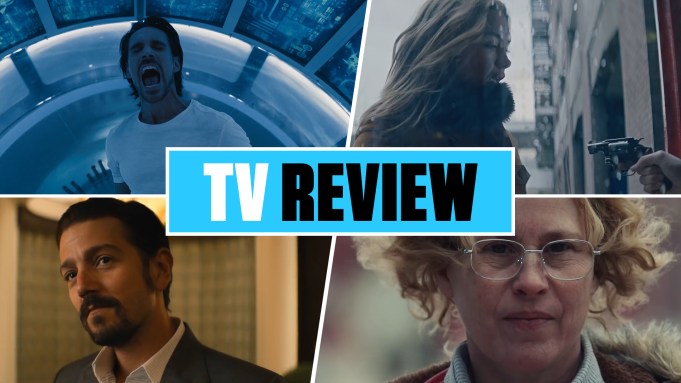 At this point deep into the fall TV season and with the inevitably busy pre-Thanksgiving weekend looming, you’d think that the era of Peak TV would give viewers some time to catch their breath and nail down their turkey plans – well think again. Which is why we’re decided to do our reviews a little differently this week and go through the menu in one go, as you can see in the video review above.

Starting today and going until the beginning of next week, there’s a feast of premieres with YouTube Premium’s sci-fi series Origin which started today, and the November 16 launching prequel of sorts of Narcos: Mexico on Netflix with Diego Luna and Michael Peña.

Adding to that, there’s Showtime’s Ben Stiller directed and Benico Del Toro, Paul Dano and Patricia Arquette starring limited series Escape at Dannemora on November 18. Opening the same night as HBO’s first foreign language series the challenging My Beautiful Friend, Dannemora is based on the real-life escape of two inmates from New York state’s third oldest prison and the woman on the inside who helped get them out.

That’s followed on November 19 with the Park Chan-wook helmed The Little Drummer Girl limited six-episode series on AMC from the team behind The Night Manager and of course John le Carre, who makes a very serviceable cameo himself as a waiter.

Here’s the thing, that smorgasbord of delights can eat up a lot of your Thanksgiving time or space on the old DVR, so let’s get granular and separate the wheat from the chaff.

Indicative of the Mika Fenton created series overall and coming off the sheer joy of YouTube Premium’s Cobra Kai, Origin isn’t exactly breaking any new territory in the final frontier with its tale of a seemingly group of confused strangers who wake up on a spaceship.

There’s a strong performance from East Enders alum Nina Wadia and a few nice touches, but overall the real gravitational pull of Origin is the look established by Paul W.S. Anderson’s directing of the first two episodes of the 10-episode first season. Put simply, though it might be seen as transitional show in hindsight for YouTube, the pretty predictable Origin isn’t essential viewing except for getting a look at the look from the Resident Evil franchise kingpin, as I say in my video review above.

If you are looking for a performance that truly deserves both your attention and respect, Oscar winner Arquette owns that spotlight Escape at Dannemora.

In the role of prison tailor shop chief Tilly Mitchell, the Boyhood vet almost singlehandedly raises the game of the Showtime limited series from an icy measured old skool TV movie with homages to Jon Voight’s Runaway Train to a passionate ménage a trois of escape of the soul and body. Unfortunately, the near glacial pace of the eight-hour series with a too measured Dano and del Toro makes the depiction of the fairly recent real-life event a slog at times. maybe best viewed in one fast forwardable go once all the episodes have aired.

A huge hit with its debut on the BBC in October, the AMC co-produced The Little Drummer Girl just doesn’t capture the lightening in a bottle magic of the multiple Emmy and Golden Globes winning The Night Manager. That’s despite its production pedigree, a riveting Michael Shannon and the director of the original and excellent Old Boy on board.

The seventies-based spy story of intrigue and personal and political subterfuge in the Middle East has a lot of style and a lot of twists and a lot of turns, even if you have read le Carre’s 1983 novel on which it is based Yet, in the end, the Florence Pugh and Alexander Skarsgård
co-starring Little Drummer Girl mainly adds up being a good-looking narrative feedback loop infuriately.

Which brings us to Narcos: Mexico, by far the best of this bunch.

In what is technically the fourth season of the Netflix drug trafficking drama, Rogue One vet Luna and End of Watch actor Peña literally and figuratively kill it as the weed cartel lord in the making and his foil an ambitious and hard driven DEA agent.

I was never actually a big fan of Narcos with what I found to be its Pablo Escobar fetishization, and Narcos: Mexico actually confirms that sentiment in the best way. This Eric Newman showrun late 1970s set series is a near perfect study in character, criminal and otherwise. The very real threats and the rogue states to come are vivid backdrops of a process of actualization that never loses it edge or, at least from what I’ve seen, your interest – even when you know if you’ve seen previous seasons how a lot of this will end.

To speak to another end, if Pena and Luna don’t get Emmy nominations at the very least next year, it’ll be a crime.

So, go with Narcos: Mexico for sure this pre-Thanksgiving weekend. Check out my video review above for more on why I think you should give Origin a look but not any serious expectations. As for the solid-ish Escape at Dannemora and The Little Drummer Girl, leave them as something to dip into on January 1, 2019 once all the episodes of both have aired, been recorded and you need to nurse away that hangover.

This review first ran on November 14.