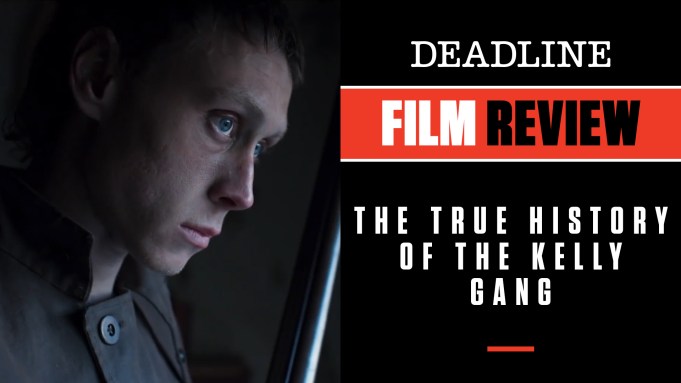 The True History of the Kelly Gang is another hostage from the 2019 Toronto International Film Festival that was forced to pass up a theatrical run and will be going out on VOD and digital platforms this Friday. Actually, that’s not totally true because a press release this week trumpets this news: “Also something exciting – The film will now be playing exclusively in LA on the big screen at the Mission Tiki 4 Drive-In in Montclair!”How about that? If you told me a lavish Australian western with a hot cast including Russell Crowe, Charlie Hunnam, George McKay (straight off 1917), Nicholas Hoult and others would be touting the exclusive L.A. booking at a Montclair drive-in, I would have said you were on crack.

But these are different times, and that is the truth. What isn’t the truth, apparently, is this movie — which opens with the message that none of it is true. But even that filmmaker warning is subject to conjecture, as is just about everything about notorious Australian outlaw Ned Kelly and his Robin Hood-like exploits in the 19th century, where he lived a short life of just 25 years.

True or not, the story filmmaker Justin Kurzel (Macbeth, Assassin’s Creed) and screenwriter Shaun Grant have cooked up in this adaptation of Peter Carey’s 2001 novel is a wild and entertaining, violent and punk, bloody and baffling telling of the Kelly legend. It has been done before — notably Mick Jagger’s odd attempt in 1970 and then a stab by the late Heath Ledger in 2003 — but not with this level of hubris. This one starts with young Ned (Orlando Schwerdt) living in the Outback and dealing with a drunken father and mostly his take-no-prisoners mother (an excellent Essie Davis), where he witnesses her sexual liaisons with the likes of local lawman Sgt. O’Neill (Hunnam) and by implication the colorful outlaw Harry Powers (Crowe), who eventually adopts Ned and takes him under his wing, showing him the ropes as it were. This section is the film’s best as it gives us a view of what shaped the young Kelly and sets up the second half when Kelly returns from a prison, now grown up and played by McKay.

Justin Kurzel On ‘True History Of The Kelly Gang’: “In Australia, Ned Kelly Is Made Out To Be A Beacon” – Toronto Studio

The film then covers his exploits in putting together the ragtag group of horse thieves and outlaws known as the Kelly Gang, which is a cross-dressing bunch derived from the Irish Sons of Sieve out to start a rebellion and avenge Ellen’s imprisonment. There also is his strange encounter at a brothel with not only Mary (Thomasin McKenzie), to whom he takes a liking, but also a dour British constable (Nicholas Hoult) and so much more — all leading to a horrific showdown (metal helmets and all) with the authorities he so detests. That’s where it really gets punk.

The film, as I show in my video review that you can check out by clicking the link above with scenes included, is all over the place and might not be to everyone’s taste, to say the least. What it does have going for it is a fine group of actors at the top of their game including McKay, delivering a brazen and balls-out take on Ned; a girthy and gritty, over-the-top Crowe; and a completely different kind of role for Hoult, who seems to be having a heyday playing the stiff-upper-lipped constable. McKenzie, Davis and Hunnam all have their moments, but I have to say young Schwerdt impressed me the most before he had to hand off the role to McKay. The casting here is uncanny as he looks exactly like a younger version of McKay and the transition is seamless.

Ari Wegner’s cinematography is breathtaking at moments, and the costume design that included putting these mangy outlaws in women’s frocks is exceptional. But again, it ain’t for everyone. Paul Ranford, Hal Vogel, Liz Watts, and Kurzel produced. IFC Films is the distributor.

Do you plan to see The True History of the Kelly Gang? Let us know what you think.