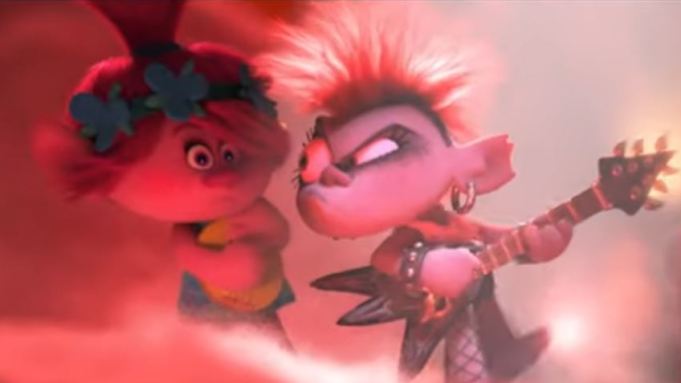 A gentle, poppy rendition of “The Sound of Silence” is interrupted by a noisy metal guitar that breaks into the intro of “Crazy Train.” No, your Spotify isn’t on shuffle, it’s the first trailer for Trolls World Tour, the sequel to the 2016 toon hit starring Anna Kendrick and Justin Timberlake.

“There are other kinds of Trolls,” we are told. Indeed.

Here’s how this ditty goes: Poppy (Kendrick) and Branch (Timberlake) discover that they are but one of six different Troll tribes scattered over six different lands and devoted to six different kinds of music represented by six strings: funk, country, techno, classical, pop and rock. With that twist revealed, a member of hard-rock royalty, Queen Barb (Rachel Bloom), aided by her father King Thrash (Ozzy Osbourne), wants to destroy all other kinds of music to let rock reign supreme.

Anyone got a problem with that?

But back to the premise: With the fate of the world at stake, Poppy and Branch, along with their friends — Biggie (James Corden), Chenille (Caroline Hjelt), Satin (Aino Jawo), Cooper (Ron Funches) and Guy Diamond (Kunal Nayyar) — set out to visit all the other lands to unify the Trolls in harmony against Barb, who’s looking to upstage them all.

Walt Dohm directs the film, with David P. Smith co-directing, Gina Shay producing and Kelly Cooney Cilella co-producing; all are Trolls veterans. Universal streets the film on April 17. Check out the trailer above, and tell us what you think.

No bats were harmed during the production of this movie (we believe).