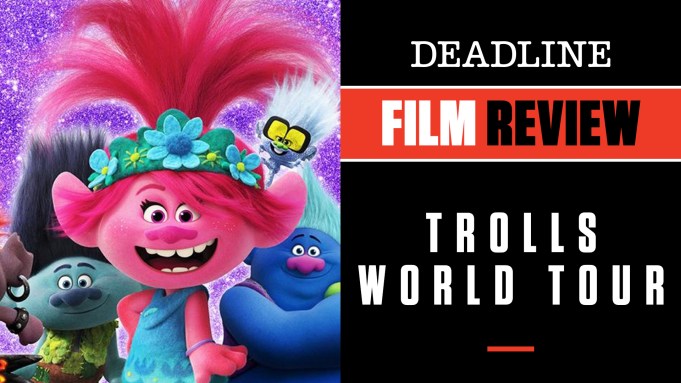 In these unprecedented dark times, it is great to welcome any ray of light, and that certainly is the case with Trolls World Tour. Apart from being a satisfying return to this colorful and happy pixie universe, the sequel to DreamWorks Animation’s 2016 hit Trolls also is making a bit of motion picture history: It was planned to get a wide theatrical release today but instead is premiering on VOD.

It was not great news for theater owners when Universal announced that, due to extraordinary circumstances, it would be taking out a movie planned to be playing on big screens around the world this Easter holiday and instead going largely VOD, rather than wait for the business to get back to normal. (The pic is being offered to any theaters that are open — which, according to Deadline’s count this week, is just 14 and mostly drive-ins.) This is an ideal movie to see with a big crowd, but wherever and however it is seen, it will be a sweet 91 minutes, especially for families looking for an uplifting, toe-tapping good time. Kids are gonna love it.

Returning to anchor this new visit to the music-obsessed Troll land is Queen of Pop, Poppy (Anna Kendrick) and her droll Troll sidekick Branch (Justin Timberlake). It seems all is content with life there, which is such a fantasia of bright and vivid color that it looks like everyone has been permanently trapped in a game of Candyland. However, trouble always lurks in these films, and in this case it comes in the form of Queen Barb (Rachel Bloom), the royal face of hard rock, and her father King Thrash (unmistakably Ozzy Osbourne), who want to banish all other forms of music, especially the dreaded pop, eliminate all the harmony that brings so many different Trolls together (musically and otherwise) and thereby establish rock as the sole anthem of the land.

To do this, they simply have to eliminate the five other strings of the six-string guitar including funk, country, techno, classical, and, of course, pop. This is not to even mention the dire future planned for yodeling, reggae, rap and just about any other form of music you can think of. Setting out on their own “world tour” to squash Barb’s plans, the eternally optimistic Poppy, Branch and friends seek to warn others, and the film’s plot kicks into gear. But it basically is just an excuse for a terrific soundtrack with a plethora of styles and songs, both original and well-known (Cyndi Lauper’s “Girls Just Want to Have Fun” — which replaces “girls” with “trolls” — “Who Let the Dogs Out,” “Barracuda,” etc.). I especially loved the visit to “country,” where Delta Dawn (Kelly Clarkson) presides with her Tammy Wynette tower of hair, and the horse Hickory (Sam Rockwell) also is along for the ride, even with some surprises up his mane. The “classical” section is its own homage to Disney’s Fantasia. The great George Clinton as King Quincy and Mary J. Blige as Queen Essence bring just the perfect touch of soul to the proceedings, when it comes to them. You get the idea.

Timberlake also serves as the film’s musical supervisor, and he and his colleagues serve up a rich menu of tunes that help to drive home this toonful and welcome message that we are all in this together, that all kinds of music bridges our divides rather than tearing us apart. It is a welcoming tonic for these times and something kids, and maybe especially their parents, should be heeding right about now in such a polarized environment.

But that aside, Trolls World Tour is just pure entertainment, well worth the $19.99 price of admission in your own home. The excellent voice cast also includes James Corden as Biggie, Ron Funches as Cooper and a right-on-the money Kenan Thompson as the irresistible Tiny Diamond. Director Walt Dohrn and co-director David P. Smith have made sure this film is so visually enchanting that you could go blind at just the density of the palette.

Timberlake was nominated for an Oscar for the ultra-catchy “Can’t Stop the Feeling” from the original Trolls, and there are some fine rock ‘n’ troll successors in this follow-up including the cool “Don’t Slack.” My favorite is the big production number “Just Sing.” One of these could bring him and his collaborators a return to the Academy Awards (as long AMPAS stretches its rules to allow this to qualify).

The producer is Gina Shay. Check out my video review with scenes from the film at the link above.

Do you plan to see Trolls World Tour? Let us know what you think.