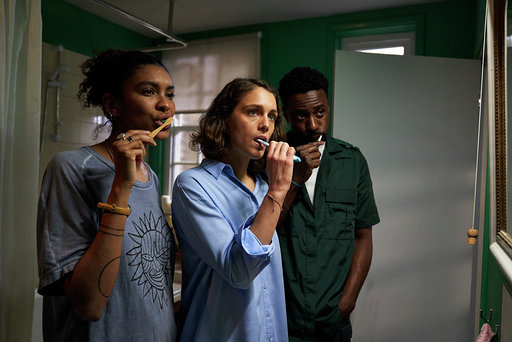 Directed by Athina Rachel Tsangari (Attenberg) and Stella Corradi (On The Edge), the show will air on BBC in the UK and HBO Max in the U.S. Writers are Duncan Macmillan and Effie Woods. BBC Studios is handling international distribution.

Set in crowded, expensive London, the series follows a cash-strapped couple who open their small apartment to a third person, discovering a new way to live – and love – in the process.

Starring are Gary Carr (The Deuce), Ariane Labed (The Souvenir) and Thalissa Teixeira (The Musketeers).

House Productions’ joint CEO’s Tessa Ross and Juliette Howell told us, “We are absolutely thrilled that the first five episodes of Trigonometry will be premiering in the Berlinale Series this year. Trigonometry is a warm, funny and emotionally truthful drama about modern relationships that has been brought to life in such a beautiful way by our cast Ariane Labed, Gary Carr and Thalissa Teixeira.

“With a palpable on screen chemistry, the trio take us on a modern day journey of the different faces of modern love. Duncan Macmillan and Effie Woods’ exquisite scripts have been beautifully realised by our two hugely talented and award-winning directors, Athina Rachel Tsangari (who directed episodes 1 – 5) and Stella Corradi (who directed episodes 6 – 8), to give a truly special show to share at Berlinale.”